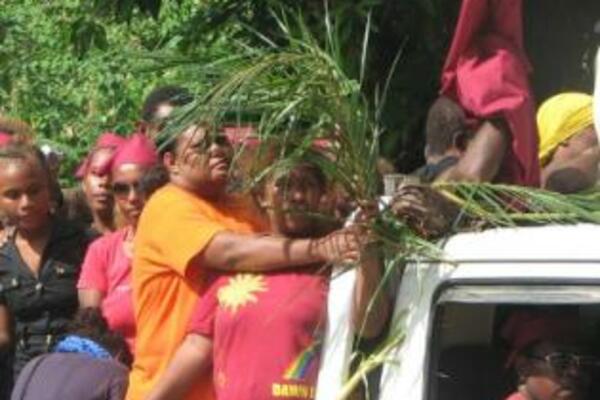 Three former MPs from the previous House have retained their seat. Job Tausinga, Seth Gukuna and Varian Lonamei have won comfortably as results slowly come in.

West Honiara: Counting has stopped just after 5pm today at the Rove Police station with police presence remaining strong. Only seven out of the twenty four ballot boxes have been completed so it is likely that the result will be out late tomorrow afternoon. Polling agents are tightlipped with the results so far although it is understood Namson Tran is in a strong lead ahead of Isaac Inoke.

East Honiara: Only five polling stations counted so far with a reportedly low turnout. Counting has also stopped after 5pm today and result will be available tomorrow when counting continues. So far newcomer Douglas Ete is said to be in a strong lead with Charles Dausabea in second place.

Central Honiara: Counting has stopped with most ballots counted. Result should be available tomorrow mid morning.

North West Guadalcanal constituency: Honiara Businessman Bobo Detke is leading the count for the North West Guadalcanal constituency with seven polling stations being counted so far. On second place is the former MP Siriako Usa and a distant third being Joseph Neilsen. Five more polling stations are left and there appears to be an improvement in voter turnout as counting continues.

Counting for all Constituencies in Guadalcanal is being conducted at the National Archives so results will likely be made available tomorrow.

Counting in most constituencies has begun in the provincial capital, Auki.

East Malaita: Only started counting in the afternoon so results will be tomorrow.
Aoke/Langalanga: Mathew Wale and Billy Manu are frontrunners for the Aoke Langalanga constituency as counting heads towards polling stations in the lagoon.

North Malaita: Jimmy Lusibaea is leading in most polling stations counted so far with Leslie Kwaiga and Enele Kwanairara still in close contest.

Baegu/Asifola: So far the leading candidate is Henry Olobeni with Toswel Kaua in close second.

Counting in all constituencies has begun, although with late arrivals of ballot boxes to the counting stations it is likely that the results will be tomorrow.

Counting in Buala is well underway.

Maringe/Kokota: Former MP Varian Lonamei has been declared winner by the Returning Officer.

Gizo Kolombangara: Only two polling stations left, it is understood former MP Gordon Darcy Lilo is performing strongly so far with results expected soon.
Other Constituencies will give their results tomorrow.

Counting still continuing, with a late start it is expected that results will be made available tomorrow.

Counting in all constituencies continuing, because of bad weather most counting started late. Looks very likely that results will be available tomorrow.

Ngella Constituency: Counting completed for six polling stations so far. Reports from SIBC say that there appears to be a low turnout attributed to bad weather.

Former MP Mark Kemakeza, John Lee Hatimoana and Bartholomew Parapolo still leading the count. Twenty polling stations left so it is quite likely that the result will be made available tomorrow. Counting has been stopped and will resume tomorrow morning.

Savo/Russell Constituency: Counting has began, delay in counting due to late arrivals of ballot boxes to the counting stations, due to bad weather. Counting has been stopped and will continue tomorrow.

More updates will be made as and when results come to hand.