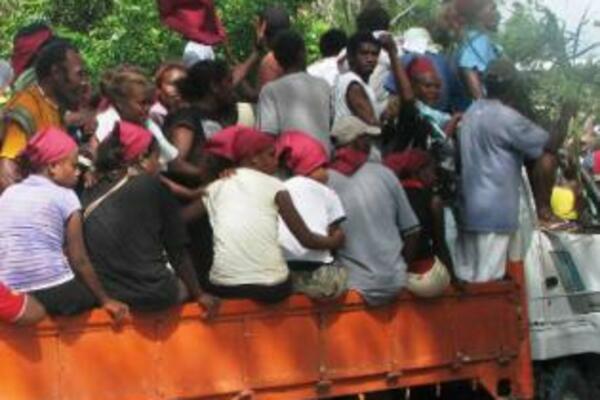 Still no confirmed results apart from North New Georgia Constituency in the Western Province where Job Tausinga has won comfortably for his seventh term in Parliament. Below is a small update of progress so far.

HONIARA
West Honiara: Counting continues at the Rove Police station for West Honiara with a very strong police presence. It looks likely that the outcome will be between outgoing MP Isaac Inoke and Honiara Businessman Namson Tran. Six out of the twenty four ballot boxes have just been completed.

East Honiara: Four polling stations counted so far with a reportedly low turnout. Results are still too close to call. Officials are taking a short break.

GUADALCANAL PROVINCE
North West Guadalcanal constituency: Honiara Businessman Bobo Detke is leading the count for the North West Guadalcanal constituency with seven polling stations being counted so far. On second place is the former MP Siriako Usa and a distant third being Joseph Neilsen. Five more polling stations are left and there appears to be an improvement in voter turnout as counting continues.

All other constituencies will have to wait since there is only one counting station - the National Archives, so results will likely be made available tomorrow.

MALAITA PROVINCE
Counting in most constituencies has begun in the provincial capital, Auki.

East Malaita: Only started counting in the afternoon so results will be tomorrow.
Aoke/Langalanga: Mathew Wale and Billy Manu are frontrunners for the Aoke Langalanga constituency as counting heads towards polling stations in the lagoon.

MAKIRA PROVINCE
Counting in all constituencies has begun, although with late arrivals of ballot boxes to the counting stations it is likely that the results will be tomorrow.

ISABEL PROVINCE
Counting in all constituencies has begun.

Gizo Kolombangara: Only six polling stations left, with the results expected later
in the afternoon.

CHOISEUL PROVINCE
Counting still continuing, with a late start it is expected that results will be made available tomorrow.

TEMOTU PROVINCE
Counting in all constituencies continuing, some results expected later in the afternoon.

CENTRAL PROVINCE
Ngella Constituency: Counting completed for six polling stations so far. Reports from SIBC say that there appears to be a low turnout attributed to bad weather. Former MP Mark Kemakeza, John Lee Hatimoana and Bartholomew Parapolo still leading the count. Twenty polling stations left so it is quite likely that the result will be made available tomorrow.

Savo/Russell Constituency: Counting has began, delay in counting due to late arrivals of ballot boxes to the counting stations, due to bad weather.

More updates will be made as and when results come to hand.