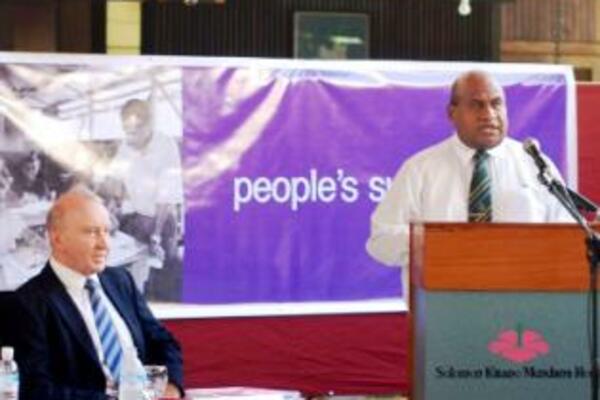 The results of the third annual People's Survey, which documents the opinions of over 5000 Solomon Islanders on the living conditions and services throughout their country, were released yesterday.

The People's Survey 2009, conducted by the independent ANU Enterprise, a commercial arm of the Australian National University, employed 64 interviewers to undertake surveys and focus group discussions with 5035 Solomon Islanders across seven provinces and Honiara including a number of settlements.

The People's Survey 2009 focused on eight key areas: household economy, business and employment opportunities, access to basic services (such as health clinics and markets), law and order, public accountability, representation and civic awareness, along with questions about the Royal Solomon Islands Police Force and RAMSI.

RAMSI Special Coordinator, Graeme Wilson, said that the results of the People's Survey 2009 provide both RAMSI and the Solomon Islands Government with useful and up-to-date information which can assist their work with the Partnership Framework.

"The results give us a strong sense that development in this country cannot be successful without the engagement and support of the people of Solomon Islands. The opinions documented in the People's Survey reflect the complexities of this unique country."

Acting Prime Minister, Hon. Fred Fono said that together with the recommendations outlined in the Parliamentary Foreign Relations Committee Report tabled in Parliament in November 2009, the People's Survey provided valuable information on the opinions of Solomon Islanders.

"The 2009 People's Survey does contain insights that can be of use to both the Solomon Islands Government and RAMSI," he said.

"I urge both parties to take on board some of the expressed views and opinions."

"Since its development, the People's Survey has played an integral role in assessing RAMSI's performance," said Mr Kelly. "It is an essential part of our reporting to the Pacific Islands Forum each year, and will provide a mechanism for measuring the views of Solomon Islanders on progress against the jointly-agreed Solomon Islands Government-RAMSI partnership objectives."

Mr Kelly added that the People's Survey had also benefited Solomon Islands in other ways, including by developing a pool of trained, experienced interviewers capable of conducting complex surveys and providing statistical information in a number of areas.

"The People's Survey provides important statistics on sectors that are not directly related to the work of RAMSI, such as health and education," explained Mr Kelly. "There is an enormous amount of useful information in the People's Survey 2009 results - and I encourage everyone to use the data to further inform their work."

Summary and complete versions of the People's Survey 2009 reports are available to download from www.ramsi.org.