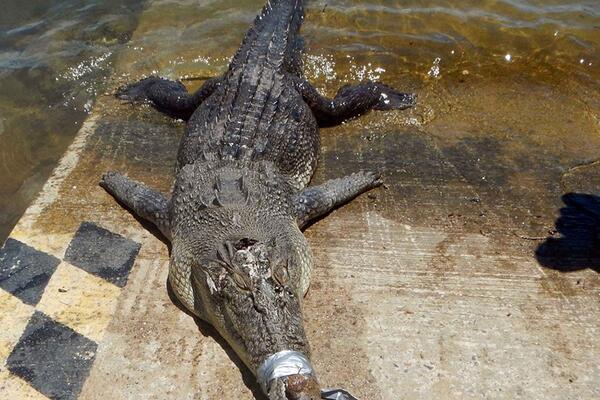 A 20 year old has survived a horrific attack by a 5.5 meter crocodile in North East Guadalcanal.

It is understood the victim was walking with friends by the riverbank when he was attacked by the 5.5 meter crocodile, pulling him inside the river.

The victim struggled and with the help of his friends he survived the incident. He was taken to the National Referral Hospital where he was admitted for medical treatment.

A village chief from that area reported the incident to the Police after the victim was admitted at the National Referral Hospital (NRH) in Honiara.

He adds: “Upon receiving the request three PRT operators went up to Ruavatu to meet with the chiefs and the community and conducted an awareness on their operation.”

“The team shot the 5.5 meter crocodile suspected to be the one that attacked the boy.”

Adam Britton, an expert from the Research Institute for the Environment and Livelihoods (RIEL) at Charles Darwin University (CDU) in the Northern Territory (NT), has suggested that as global warming continues to get higher the number of crocodile attacks will rise.

"As temperatures rise crocodiles will attack more because it will change the distribution of the crocodiles and that will cause an interaction with people who have never come into contact with crocodiles before," said Mr Britton.

Accroding to Britton crocodiles will move into areas where people aren't used to them when they lose their habitat.