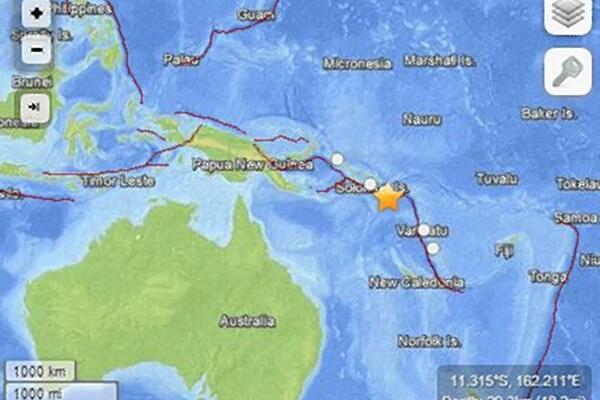 The Solomon Islands lies on the "Ring of Fire" — an arc of earthquake and volcanic activity that stretches around the Pacific Rim.
Source: Photo supplied
Share
Monday, 14 April 2014 10:52 AM

Within a span of a few hours two strong magnitude 7 earthquakes struck the Solomon Islands on Sunday.

The magnitude 7.6 quake's epicenter was 323 kilometers (200 miles) southeast of Honiara, at a depth of 29 kilometers (18 miles), according to the U.S. Geological Survey.

Following the morning quake, the Pacific Tsunami Warning Center canceled a tsunami warning after issuing an alert for some Pacific islands. The center reported that sea level readings indicated a small tsunami was generated that may have caused some destruction near the epicenter.

Late Sunday night, a magnitude 7.4 quake struck in the same area at a depth of 35 kilometers (22 miles), the USGS said. The Pacific Tsunami Warning Center issued a warning for the Solomon Islands, Vanuatu and Papua New Guinea following that temblor.

The NDMO says there have not been any reports of widespread damage in Makira from the tsunami. There have also been no reports of damage in Honiara.

Andrew Catford, the Solomon Islands country director for World Vision, said after the morning quake that the aid group's staff in the Kirakira office in Makira province reported that there was no tsunami, but strong currents and heavy waves pounding the reefs. He said the group's staff evacuated to higher ground as a precaution.
"We felt this one strongly in Honiara. It was close to 30 seconds long," he said.

Residents in Honiara responded well to warnings issued by NDMO through the national broadcasters. There was however reports of people suffering minor injuries, particularly early morning church goers.

“People just panicked because of the sudden warning, there was a mad rush as people tried to exit the church..so yes some sustained minor injuries,” stated one eyewitness.

The Solomon Islands lies on the "Ring of Fire" — an arc of earthquake and volcanic activity that stretches around the Pacific Rim.

With Reports from AP