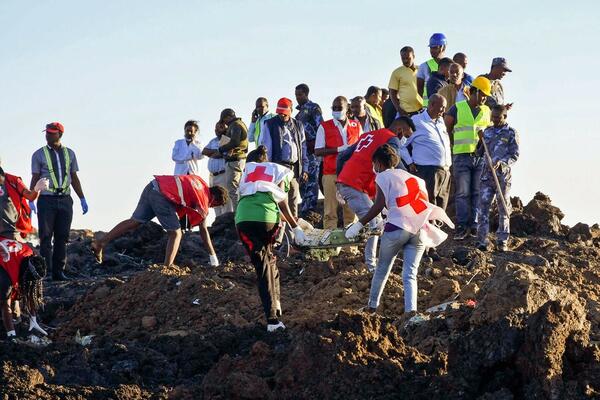 Rescue workers at the site of Ethiopia Airlines Flight 302 crash on Sunday, where more than 150 people were killed.
Source: nytimes.com
Share
Monday, 11 March 2019 07:44 AM

World leaders and citizens from over 30 countries mourned the loss of those aboard an Ethiopian Airlines flight that crashed on Sunday, including several aid workers from United Nations agencies and other humanitarian organizations.

The crash, which occurred shortly after the plane departed from Addis Ababa, Ethiopia’s capital, for Nairobi, Kenya, killed at least 150 people. The dead included at least 32 Kenyans; 18 Canadians; nine Ethiopians; eight each from the United States, China and Italy; and seven each from France and Britain, the airline said.

At the Jomo Kenyatta International Airport in Nairobi, distraught family members and friends made their way to an emergency center set up by the authorities at a nearby hotel.

Condolences poured in from around the world as details about those aboard gradually came to light. Many of the dead were aid workers traveling on a flight that is sometimes called the “U.N. shuttle” because of its frequent use by employees of United Nations agencies.

United Nations officials were trying to confirm whether some of the passengers were heading to Nairobi for a session of the United Nations Environment Assembly, described as the world’s highest-level decision-making body on the environment. The event, scheduled to start on Monday, convenes representatives from United Nations member states to solve environmental problems.

The executive director of the World Food Program, a United Nations organization, said in a tweet that staff members from the group were among the dead. Aid workers from at least one other United Nations agency, Catholic Relief Services and other organizations were also aboard the plane.

Tamirat Mulu Demessie, a child protection specialist from Ethiopia who worked for the nonprofit Save the Children, was one of the victims, according to a statement from the organization. Mr. Demessie worked with programs for children affected by violence and helped reunite children with their families during emergencies.

“He often sacrificed time with his own family and children to live out his passion for protection work,” said Lara Martin, a friend and former colleague. “He challenged and empowered everyone that worked with him to do more for children, holding perpetrators accountable.”

A chief executive who oversaw the Tamarind Group, a company that operates restaurants and hospitality establishments in Kenya, was also among those killed, according to a Facebook post by the Tamarind Tree Hotel. The hotel announced the death of the chief executive, Jonathan Seex, with “immense shock and grief.”

The airline identified the pilot as Yared Getachew and the first officer as Ahmednur Mohammed. It said Mr. Getachew had more than 8,000 flight hours and described his performance as “commendable.”

One was Zhou Yuan, a worker for the China Electronics Technology Group Corporation, which sells electronics, communications and security technology for civilian and military needs, The Beijing News reported, citing an official for the corporation.

A Nairobi-based staff member with the United Nations Environment Program and an employee of Aviation Industry Corporation of China were also among the dead, according to a list of victims provided by the Chinese embassy in Kenya, The Global Times reported.

Among the dead from Italy was a councilor of cultural heritage from Sicily, Sebastian Tusa; the founder of the nongovernmental organization International Committee for the Development of Peoples, Paolo Dieci; and two employees of the World Food Program, Maria Pilar Buzzetti and Virginia Chimenti.

Carlo Spino, the president of a nongovernmental organization called Africa Tremila; his wife, Gabriella Vigiani; and another official from the group, Matteo Ravasio, were also victims.

A Serbian state news agency said Djordje Vdovic of Serbia, who worked at the World Food Program, was also killed. Michael Ryan, an Irish citizen who worked for the organization, was also on the flight, according to an Irish news site, RTE News.

Anton Hrnko, a member of the Slovakian parliament, said on Facebook that his wife Blanka, his son Martin and his daughter Michala died in the crash.