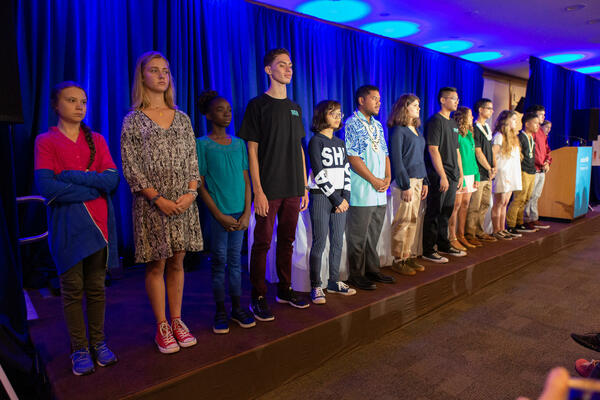 Sixteen child petitioners from 12 countries around the world, including children from the Republic of the Marshall Islands (RMI) and Palau, presented a landmark official complaint to the United Nations Committee on the Rights of the Child on Monday in New York to protest lack of government action on the climate crisis.

The child petitioners, aged between eight and 17, allege that Member States’ failure to tackle the climate crisis constitutes a violation of child rights. They urge the independent treaty-body to intervene and call on Member States to take urgent action to protect children from the devastating impacts of climate change.

“We all have the right to enjoy our planet and we should all protect that right. Our generation is trying to prevent climate change for future generations,” said 17-year-old Carlos Manuel, child petitioner from Koror, Palau.

“I would be disappointed with myself and our leaders for not taking action. I would feel I failed myself for not having those leaders take action because we are kids and we have a voice to make the change, but we don’t have the power to make it. We could say everything we want to say, but it’s still in their hands to make those changes.”

The complaint was filed through the Third Optional Protocol to the Convention on the Rights of the Child, a voluntary mechanism which allows children or adults on their behalf to appeal directly to the United Nations for help if a country that has ratified the Protocol fails to provide a remedy for a rights violation.

Announced at a press conference hosted at UNICEF Headquarters in New York, the complaint aims to inspire the urgent action needed to curb global heating and mitigate the impact of the climate crisis.

“The Convention on the Rights of the Child has been ratified by the majority of Pacific Island countries and Territories. We support children coming together, taking a stand and asking their leaders questions on what they are doing to combat climate change so that children inherit an environment in which they will thrive,” said UNICEF Pacific Representative, Sheldon Yett.

UNICEF supports the child petitioners exercising their right to bring complaints via the communication procedure of the Third Optional Protocol. However, UNICEF is not a party to the complaint. UNICEF is neutral and plays no part in the adjudication process by the Committee on the Rights of the Child.

About the Convention on the Rights of the Child

Adopted on 20 November 1989, the Convention on the Rights of the Child (CRC) is an international human rights treaty outlining the civil, economic, social, political and cultural rights of children - without discrimination of any kind. It is the most widely ratified human rights treaty in history. Complaints filed under the CRC’s Third Optional Protocol are adjudicated upon by the Committee on the Rights of the Child – a group of independent experts. The Committee is able to receive complaints from children, groups of children or their representatives against any State that has ratified the Protocol. The Committee is also able to launch investigations into grave or systematic violations.

For more information about the convention, visit www.unicef.org/child-rights-convention

UNICEF works in some of the world’s toughest places, to reach the world’s most disadvantaged children. Across 190 countries and territories, we work for every child, everywhere, to build a better world for everyone.