13 YO Girl and 30 YO Man Arrested for Selling Kwaso 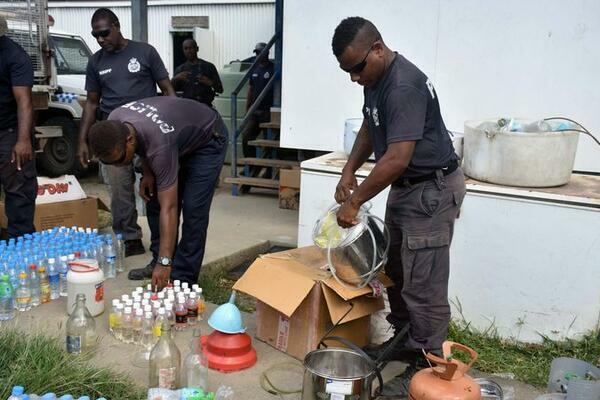 A 13-year-old girl and a 30-year-old male person were arrested at a private resident in Tulagi following information received from the community in the early hours of Sunday 6 October.

Provincial Police Commander (PPC) Central Province, Inspector Hugo Maelasi says, “As a result of the raid police confiscated forty five bottles of kwaso which were in the possession of the male and female suspects at their resident.”

“Both suspects were arrested and placed in the cell at the Tulagi Police Station. It is alleged that during the interview the male suspect told the police that the bottles of kwaso were bought in Honiara by the female suspect for sale in Tulagi.”

PPC Maelasi says, “The male suspect was charged with the sale of liquor without a license contrary to Section 57 Subsection 1 of the Liquor Act. He will appear in court during the next Tulagi court circuit. The female suspect will be dealt with later as police will have to consult the Social Welfare Department as she is a juvenile.”

“I want to remind all parents that it is our duty to take all necessary steps to ensure our children do not involve themselves in illegal activities that will endanger their lives,” PPC Maelasi emphasises.

Police in Tulagi will continue to conduct operations as it implements the Kwaso Action Plan in the Central Province.
"We are seriously looking at conducting joint operations with police in Honiara to stop kwaso being bought in the capital city for sale in Central Province," says PPC Maelasi.

He warns the people of Central Province: "Kwaso is an illegal substance and anyone suspected of consuming, in possession or selling the substance will be dealt according to the law."