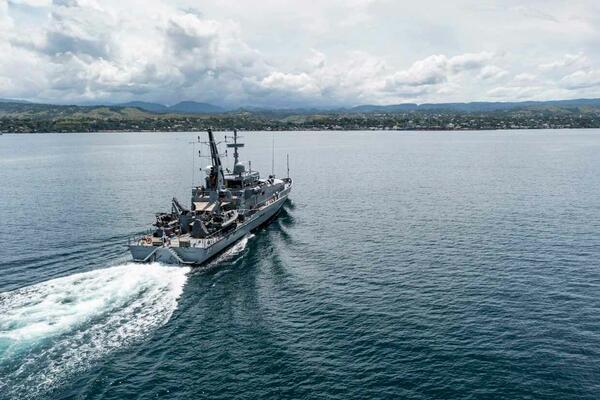 "These will universally apply to all visiting naval vessels," the Prime Minister's office said in a statement.
Source: NBC
Share
Wednesday, 31 August 2022 10:20 AM

The Solomon Islands has suspended entry into its waters for foreign navy ships pending adoption of a new process for approval of port visits, the Prime Minister's office said on Tuesday, in a bid to better police its exclusive economic zones.

The suspension of entry followed incidents last week when a U.S. Coast Guard vessel, the Oliver Henry, and a Royal Navy vessel, HMS Spey, were unable to make port calls because the government did not respond to requests to refuel and provision.

"We have requested our partners to give us time to review, and put in place our new processes, before sending further requests for military vessels to enter the country," Prime Minister Manasseh Sogavare said in a statement.

"These will universally apply to all visiting naval vessels," he said in a statement emailed to Reuters.

The Solomon Islands have had "unfortunate experiences of foreign naval vessels entering the country's waters during the course of the year without diplomatic clearance granted", the statement said, without naming the countries.

The suspension of naval ship visits will be lifted when a new process is in place.

The Oliver Henry and HMS Spey were on patrol for illegal fishing in the South Pacific for a regional fisheries agency at the time they sought entry to refuel at Honiara, the Solomons' capital.