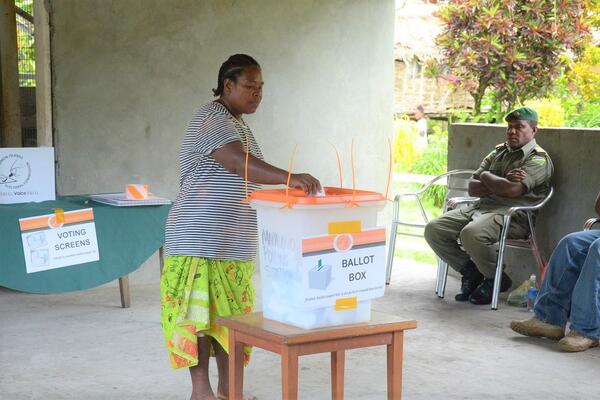 Chairman of the Electoral Commission Mr. Patterson John Oti said the primary objective of the consultations was to solicit views from stakeholders on holding simultaneous elections and the proposed amendments to the election laws.
Source: File
Share
Thursday, 18 August 2022 12:09 PM

The Solomon Islands electoral commission (SIEC) are working on a proposed electoral reform that will see both the provincial and national elections being held on the same day.

Currently the two elections are held on separate dates, with one preceding the other, often a year after.

There is currently a taskforce being established to look into the proposed electoral reform, essentially seeking to synchronize all elections. The taskforce has held consultations with key stakeholders, the most recent with the Guadalcanal provincial assembly and Honiara city council.

The Premier for Guadalcanal Province in his remarks during the opening, welcomed the taskforce and highlighted that “if we want change to strengthen our electoral process, this is the opportunity for us to contribute to make a positive change.”

Chairman of the Electoral Commission Mr. Patterson John Oti said the primary objective of the consultations was to solicit views from stakeholders on holding simultaneous elections and the proposed amendments to the election laws.

Mr. Oti said that with any electoral reform, it is about strengthening the integrity and delivery of the electoral processes in the country.

The Honiara City Deputy Mayor said during further consultations that while such reforms are welcomed, people must be mindful “not to create opportunity that will negatively impact our life.” He said that it is important that we do not compromise elections just because of the lack of funds.

Electoral Commissioner, Mr Stanley Pirione, acknowledged the sentiments shared by the Deputy City Mayor, stating that the work is part of the Commission’s mandate, and the important thing is to solicit views from cross sections of society when working on such reforms.