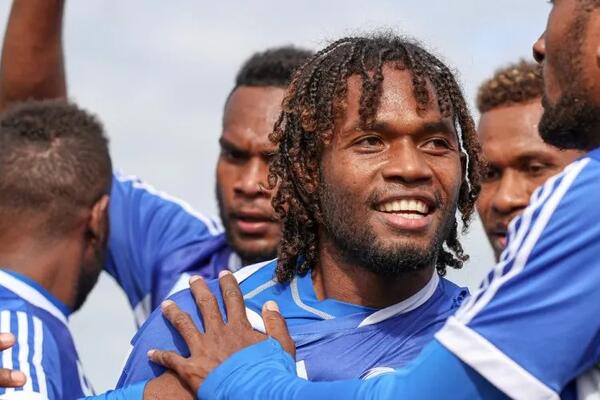 Central Coast FC of the Solomon Islands are through to the semi-finals of the OFC Champions League 2022 for the first time after edging a five-goal thriller over Papua New Guinea’s Lae City FC at Ngahue Reserve in Auckland.

A brace from Clifford Fafale and a goal from Junior Fordney in the first-half secured the win for Central Coast despite goals from Mathew David and Jonathan Allen for Lae City.

Central Coast took control early on with the dangerous Fordney causing the Lae City defenders trouble, as he did throughout the fixture.

His run in behind evaded the Lae City defenders before he poked home a smart finish from Alick Kitalo’s incisive through ball.

Fordney again proved the impetus for the game’s second goal, shrugging off Komolong before squaring for Fafale to place home a simple finish.

Fordney came close to stretching the lead before Lae City managed to reduce the deficit, David scoring from close-range after excellent work from Allen.

However, the narrow gap lasted less than a minute, as Central Coast went straight up the other end to regain their two-goal advantage, Fafale curling in from the edge of the box.

With Lae City needing a win to have any chance of progressing they pushed for goals in the second period allowing Jeffery Bule, Fordney and Fafale to all have chances to finish the game off for Central Coast.

Lae City then threatened to pull off a miracle turnaround as Allen flicked home a corner which led to a late onslaught but Central Coast held on to ensure they qualify for the semi-finals in their first ever OFC Champions League outing.

Central Coast will join Group A opponents AS Vénus in the final four, as well as Group B’s Auckland City FC and either Rewa FC or Hienghène Sport, with the result eliminating Lae City and Group A’s other competitors, Vanuatu’s Galaxy FC.