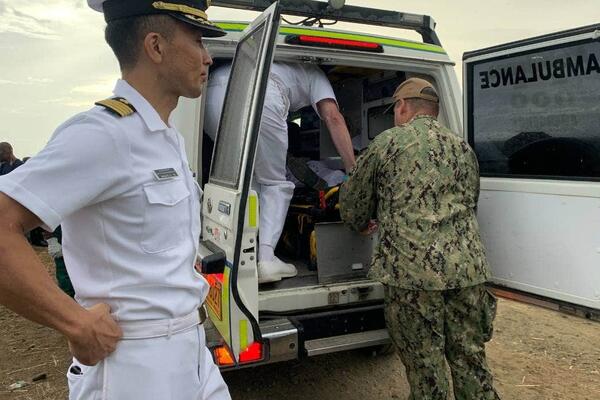 A local attacked and stabbed a Japanese military personnel during a Guadalcanal battle commemoration service on Monday.
Source: Stuff.co.nz
Share
Monday, 08 August 2022 10:18 AM

The 80th Guadalcanal battle commemoration was marred by the stabbing of a Japanese military man at the bloody ride, East Honiara.

The service at Bloody Ridge, a 30-minute drive from the main town centre, was hosted by the Solomon Islands’ Tourism Ministry.

The attack happened right beside Peeni Henare, who was seated towards the end of the front row.

Stuff reporter Torika Tokalau, who was standing right beside where the attack happened, said the man tackled the Japanese military man to the ground.

Nearby military personnel and locals immediately stepped in to stop the attack. The incident happened right before the Last Post was performed and the laying of wreaths.

The injured person was immediately treated in an ambulance by first aid responders from the US military.

A Japanese official confirmed the man had a stab wound to the right side of his neck: “He’s OK, there’s a bit of blood, but he’s OK,” he said.

Village chief Wesley Ramo said a pair of small scissors were used in the attack.

“We’re very sad this has happened, and we just want to apologise to everyone,” said Ramo.

After the attack – while trying to calm people down – Solomon Islands tourism marketing manager Fiona Teama was heard apologising to the dignitaries.

There was about a 10-minute pause after the incident.

Sherman’s security and other personnel were seen advising her about the attack before a Japanese official came to update her that the situation was under control, before the commemoration continued.

Solomon Islands tourism permanent secretary Bunyan Sivaro, after the event was completed, said: “I sincerely apologise for the unexpected and disappointing event.

“Thank you so much for everyone who controlled the situation.

“The government will take care of this and make sure this type of situation doesn’t happen again.”