Crowd Cheers on Rosefelo at the Commonwealth Games Despite Finishing Last 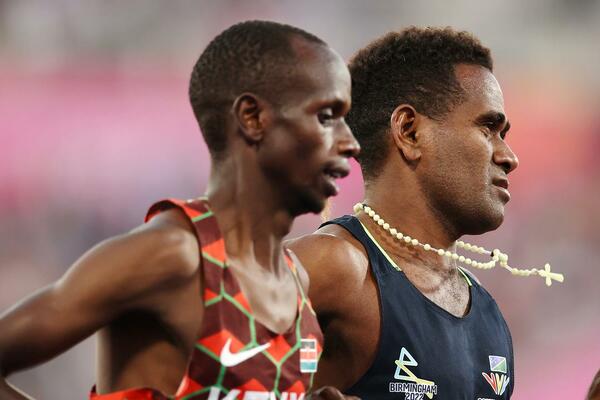 But even as the race winners were celebrating, Siosi, who was lapped once by the medal winners, went on with his race, completing more than two laps.
Source: Michael Klein
Share
Monday, 08 August 2022 07:13 AM

On Saturday, the packed Alexander Stadium here cheered Rosefelo Siosi of the Solomon Islands at the Commonwealth Games as he completed the Men’s 5000m race in 17 minutes 28.93s seconds, more than four minutes after Uganda’s Jacob Kiplimo won the gold medal.

Kiplimo won the race in 13 minutes 08.08 seconds, upstaging two Kenyans in the last few seconds, and producing a superb kick in the final lap.

But even as the race winners were celebrating, Siosi, who was lapped once by the medal winners, went on with his race, completing more than two laps.

The crowd rose in support as he passes them on his way to the finish line, reminding the people of Eric Moussambani, the Equatoguinean swimmer nicknamed Eric the Eel by the media during the Sydney Olympics in 2000 when he swam his heat of the 100m freestyle in 1:52.72, which is now officially recognised as the slowest time ever, and Eddie the Eagle, who in 1988 became the first competitor since 1928 to represent Great Britain in Olympic ski jumping, finishing last in the Normal Hill and Large Hill events.

This is not the first brush with fame for Rosefelo Siosi, who had finished the Men’s 5000m Round 1 at the Rio 2016 Olympic Games in 48th place after he crossed the finish line in 15 min 47.76 seconds.

Asked about the reaction of the spectators who cheered him as he finished, Siosi said, “It was good to hear.”

About competing at Birmingham 2022, the 25-year-old amateur runner from the Solomon Islands, who does not even have a synthetic track to practice, said, “This is my first international competition in five years. I promised myself to run in the Commonwealth Games and to run in a good time as preparation for the Pacific Games next year.

“This is the start of it. I will train hard, do a lot of work and another high-star goal for me is the 2024 Olympics.”

Asked why he took time off from running, Siosi said that was for completing his studies.

“Back home I was studying so I didn’t do sport. In my country, people do one thing at a time and our culture is that. I quit school to do running, so running is for after school.”

Talking about the lack of facilities back home in the Solomon Islands, Siosi said they will soon be getting their first running track.

“Facilities back home are not good. In May we will have the first running track.”