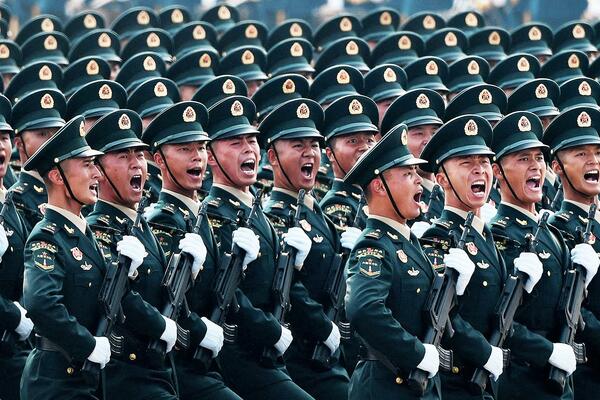 Analysts say China's leader Xi Jinping has set the legal basis for an expansion of the Chinese military's role in other countries, just weeks after Beijing signed a security pact with Solomon Islands.

With little published detail, Mr Xi's government declared he had signed off on a set of new trial outlines that allowed for Chinese "armed forces operations" that were not war.

Chairman Xi, as he is widely known in China in reference to his position as chairman of the Central Military Commission, signed off on 59 articles, according to state media, but they were not published.

Instead, government reports say they set a legal basis within China for the People's Liberation Army to "safeguard China's national sovereignty, security and development interests", according to an article in the Communist Party's media Global Times.

It also said the guidelines would define the military's role in activities that it already undertook, such as disaster relief, aid missions and peacekeeping.

Mr Xi's decision to promote and legally legitimise non-war "military operations" has raised eyebrows because it has come just months after Russian President Vladimir Putin invaded Ukraine under the guise of a "special military operation".

Mr Putin still has not formally declared war on Ukraine despite the bloody invasion, and the timing of Mr Xi's declaration has caught the attention of observers in Taiwan, the self-ruled island that China claims ownership of.

"And after what happened in Ukraine, it sends a very threatening signal to Taiwan, Japan and the surrounding countries in the South China Sea.

"I think Xi Jinping is trying to enhance China's grey-zone activities," Dr Kuo said, referring to acts that harm other states but fall below the definition of war.

Wu Qiang, an independent analyst in Beijing who previously taught at China's top university Tingha before being ousted for political reasons, also sees parallels with Vladimir Putin's language and his territorial claims to Ukraine.

"The way Beijing looks at it, a future mission to unify Taiwan would just be a continuation of the unfinished civil war of 1949," he told the ABC.

"So this is about seeking to define a future military intervention in Taiwan as a 'non-war' operation."

Dr Kuo says Mr Xi released news of the guidelines partly to offset political infighting within the military in the lead-up to a major reshuffle of the ruling Communist Party leadership later this year.

But he also believes it is linked to the recent security pact signed with Solomon Islands and a failed effort by China's Foreign Minister Wang Yi to convince other South Pacific nations to sign on to a similar agreement.

"They never released the full text of the agreement with the Solomon Islands but the media leaked the draft details and the language about protecting Chinese interests is exactly the same," Dr Kuo said.

Despite the failure of his region-wide push for a deal, Mr Wang last week published comments, making it clear China intended to continue pursuing closer ties with South Pacific nations.

"I believe there is a link [with the Solomon Security Pact]," Wu Qiang said.

"The Solomon Islands pact allows China's military to intervene in future if there's a precarious situation, or perhaps a coup or security issue.

"So these guidelines are about creating a legal basis for China to intervene."

Under Mr Xi's Belt and Road initiative, Beijing has loaned tens of billions of dollars to other countries to build infrastructure, which in some cases has reverted to Chinese ownership upon debt default.

A Chinese state-owned company is seeking to upgrade an airstrip in the highly strategic South Pacific nation of Kiribati, while in Australia, private Chinese company Landbridge has taken a 99-year lease on the strategically located Port of Darwin.

Whether threats to China's involvement in such projects are covered in the new legal framework remains unclear.

The new legal guidelines come as tensions between China and the US over Taiwan increase.

Reports have emerged that China has begun informing US counterparts at multiple levels that it does not recognise "international waters" in the Taiwan Strait.

US naval ships have this year made multiple transits through the strait, which is around 160 kilometres wide and separates China from Taiwan.

"There is no legal basis of 'international waters' in the international law of the sea," Wang Wenbin, a Chinese government spokesman, said

"It is a false claim when certain countries call the Taiwan Strait 'international waters' in order to find a pretext for manipulating issues related to Taiwan."

This move follows a previous claim from Beijing that it does not recognise a halfway "median" line in the strait that has long served to help keep Chinese and Taiwanese military jets separated.

"I think all these things are part of very integrated strategic thinking," Dr Kuo said.

Over the weekend, senior Chinese military general Wei Fenghe told a defence forum in Singapore that China would "fight to the end" to take control of Taiwan, and according to Chinese media, during a meeting with new Defence Minister Richard Marles, he reportedly also warned Australia to steer clear of the Taiwan issue.