Another Week, Another Leak 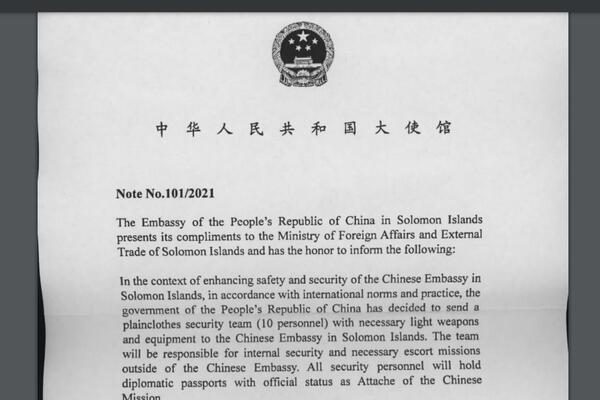 The government has responded to the leaked document through a media release, stating that the document is fake and responsible authorities will provide a response soon.
Source: YTF
By Jimmy Nolan
Share
Wednesday, 13 April 2022 09:58 AM

Another government document has been leaked to social media by a group calling themselves Public Servants for Transparency.

The leaked document was a diplomatic note from the Chinese embassy, seeking approval from the government to allow armed plainclothes security personnel for their embassy in Honiara.

“In the context of enhancing safety and security of the Chinese embassy in Solomon Islands, in accordance with international norms and practice, the government of the Peoples Republic of China (ROC), has decided to send ten (10) plainclothes security team with necessary light weapons and equipment to the Chinese embassy in Solomon Islands,” the diplomatic note reads.

The note went on to say that the security team will not be made public by the Chinese side, and that all of them will hold diplomatic passports with official status as Attaché of the Chinese embassy.

The government has responded to the leaked document through a media release, stating that the document is fake and responsible authorities will provide a response soon.

Such response will do little to clam public anxiety, particularly with the secret security agreement that surfaced recently, and the fallout that ensued.

“While it is not clear if the proposal in the letters to allow the Chinese embassy to bring in arms were approved by Cabinet, it is a matter of serious concern,” he said.

He said the leaked diplomatic note has raised more questions, as to whether the weapons listed on the leaked documents are part of the riot gears and arms shipment early last month.

Hon Kenilorea said the continuous secret dealings must be clarified for the sake of transparency and public trust.

“In diplomatic protocol, the request to arm workers of a foreign embassy is not the norm,” he said.

The group that leaked the document say they "have supporters all over goverment that have similar stories to tell."