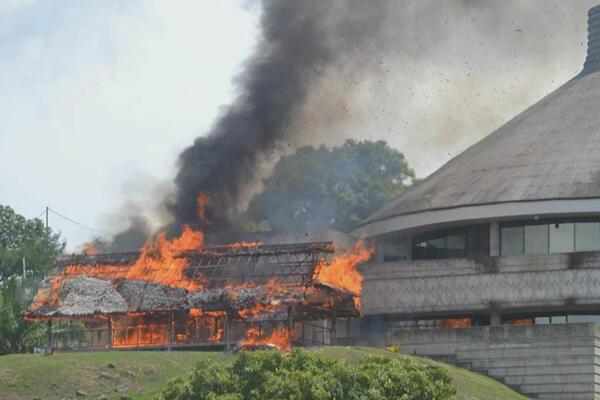 Officers of the Royal Solomon Island Police Force (RSIPF) at Central Police Station have arrested two alleged suspects on 19 December 2021 for burning down a leaf hut at the National Parliament of Solomon Islands.

Supervising Provincial Police Commander (PPC) Honiara City, Superintendent Jimson Robo says, “This has happened after the protesters demanded the Prime Minister of Solomon Islands to step down. The protesters then started to throw rocks towards the Police and put stones on the main road to block police.”

PPC Robo says, “Inside the group of protesters running towards the National Parliament House on the 24 November 2021 were these defendants who were clearly identified.”

“It is alleged that both defendants inside the leaf hut and one of them took out a box of matches and gave it to the other defendant, strike it and set fire to the leaf hut.”

Mr Robo says, “Both suspects are facing a count of arson contrary to section 319 of the Penal Code and remanded in custody for 14 days and will appear in Honiara Central Magistrates’ Court on 3 January 2022 for their next mention.”