Australian Peacekeepers Winding Down as Normalcy Returns to Honiara 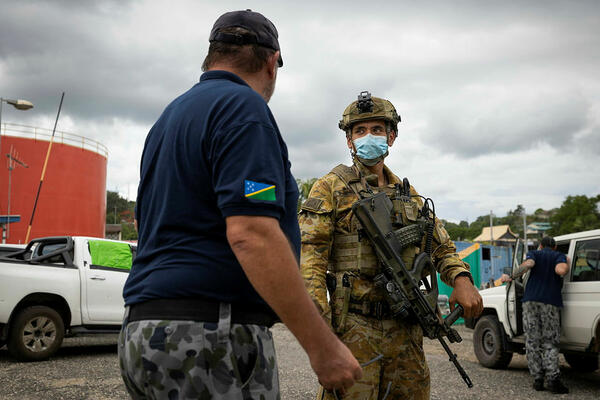 The Department of Defence said some Australian military personnel would remain to provide "command, communications, logistics and air movement" support to the joint peacekeeping effort with police.
Source: ADF
Share
Thursday, 23 December 2021 06:18 AM

A contingent of foreign peacekeepers deployed to the crisis-hit Solomon Islands will begin to return home, the Australian government said.

Roughly 40 Australian defence personnel are due to return from the South Pacific nation in the next 48 hours, a Defence spokesperson told AFP.

"The Australian whole of government mission to [the] Solomon Islands is adjusting its posture to meet operational needs," the spokesperson said in a statement.

Over 200 peacekeepers from Australia, Fiji, Papua New Guinea and New Zealand were deployed to Honiara to help maintain calm after protests spiralled into days of unrest that claimed at least three lives and reduced much of downtown to smouldering rubble.

The Department of Defence said some Australian military personnel would remain to provide "command, communications, logistics and air movement" support to the joint peacekeeping effort with police.

Australia previously led a peacekeeping mission in the Solomons from 2003 to 2017, but Canberra had insisted the current deployment would only last "a matter of weeks".

The crisis erupted late last month when protests over government policies turned violent, fuelled by poverty, unemployment and inter-island rivalries in the nation of 800,000.

The 66-year-old four-time leader sailed through a vote of no confidence in parliament earlier this month, blunting the attacks of his opponents.

His rule is opposed by the leaders of Malaita - the Solomons' most populous island - who continue to call for more autonomy, and hint at a push for statehood but so far have not returned to the streets in protest.