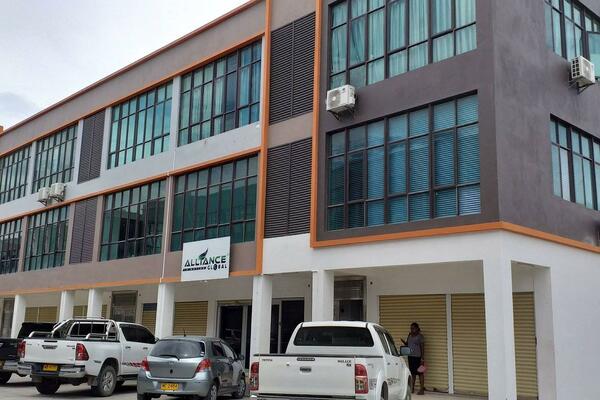 AIM Global established its office at the Capital Park building, but has since relocated.
Source: Facebook
Share
Wednesday, 15 December 2021 10:42 AM

A former AIM Global ‘investor’ is warning the public to stay away from promoters of the scheme, saying she now realizes that it is “nothing but a pyramid scheme.”

She says the lure of AIM Global was in its promotional programs, promising millions in return for an investment in one of its products.

She says a good friend recruited her and she paid for a starter pack for around SBD$500. She recruited colleagues from work, convinced that she was doing the right thing – spreading this investment idea where all can make money.

“We were told to recruit a certain number of sales people, and that we will make more money if we do that.

“At the start it was ok because I was getting many of my friends on board, and so I was paid some commission. But I realized that I was not making much money from the products, it was the commission that was making me money.

“I ran out of people to recruit, and very soon everything stopped, the commission and the calls from the promoters, and I was just stuck with all these products that I could not sell.

“I am embarrassed to say that I have lost many friends because of the promise of quick money, many are stuck with these products that is very hard to sell.

“I am warning the public because I see the same people starting to go around with new products, trying to recruit people.”

AIM Global was first registered as a business name in 2017 but has since been deregistered in 2019.

Pyramid schemes have flourished in Solomon Islands because of its promise of quick returns for ‘investors.’

AIM Global is typical of a product-based pyramid scheme where distributors recruit salespeople who pay for a starter pack. These starter packs start from SBD$300 to as high as SBD$3,000.

Like any pyramid scheme the people at the top of the pyramid get commissions from everyone in their downline i.e., the many levels of recruits below them on the pyramid.

Many Solomon Islanders have been tricked into investing in such schemes, with many soon realizing that such product-based pyramid schemes are hard to sell, and end up losing money.

It becomes clear that eventually, and rather quickly, the market becomes saturated. There are too many people trying to sell the same unattractive product and there's no one left to be recruited.