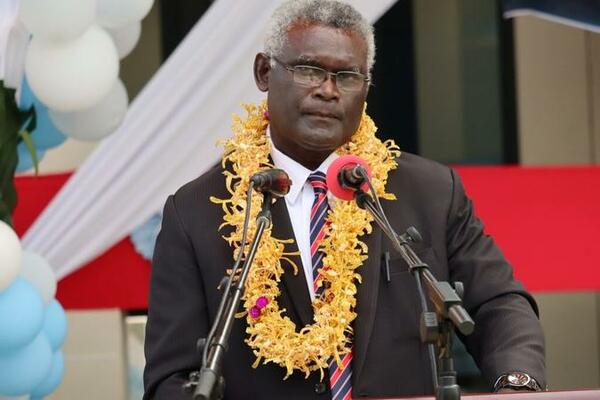 The celebrations will take place at the John F Kennedy Stadium and the Prime Minister will be the chief guest at the ceremony.
Source: File: RNZ
Share
Monday, 13 December 2021 12:10 PM

The Sogavare - led delegation are now in Munda where they will proceed to Noro in the afternoon to participate in the handing over ceremony of Commodity Export Marketing Authority’s (CEMA) Buying Centre and Commodities Refinery site.

From Noro, the delegation will head to Gizo where the Province will host its second appointed day’s celebration.

The celebrations will take place at the John F Kennedy Stadium and the Prime Minister will be the chief guest at the ceremony.

The Prime Minister has announced in parliament during the Sine Die motion that he has accepted the invitation by Western Province’s Premier to attend the Province’s second appointed day.

The delegation is expected to return to Honiara Wednesday this week.

The Prime Minister is accompanied by his wife madam Emmy Sogavare and also the Minister of Provincial Government and Institutional Strengthening (MPGIS), Honourable Rollen Seleso.