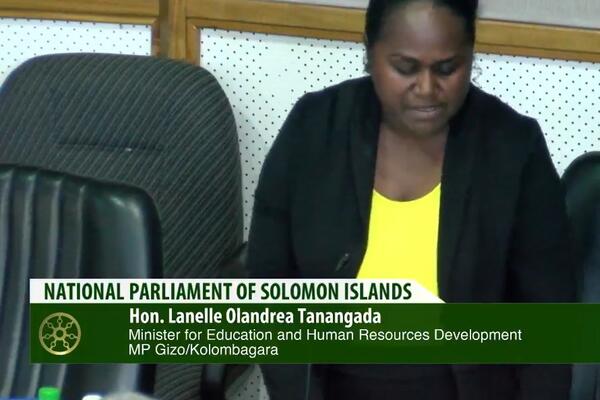 The MP for Gizo/Kolombangara and Minister of Education Lanelle Tanangada has spoken against the motion of no confidence against Prime Minister Manasseh Sogavare.

She says that the youths that got involved in the recent riots were being misled, and believes that there are other forces at play that seeks to disunite the country.

She says more must be done to unite the country, and not divide. She cited the misinformation being spread on social media on the current government and senior officials breeding suspicion and threats to life.

She also says that the role of mass media is not without fault, citing reports that suggests sensational reporting within the media is now commonplace, losing sight of their original role.

She says as minister of education a bill will soon be presented to Parliament which will shape the countries new future in education. Tanangada says that investment in education has increased substantially under the current government, and therefore unfair to blame the Prime Minister on issues within the education sector.

She says her ministry is now embarking on the financing of education, with other reforms in the pipeline pending the education bill.

The MP for Gizo/Kolombangara says there are many issues that need to be addressed through dialogue, but leaders also need to recognize the ethnic diversity in the country going forward.