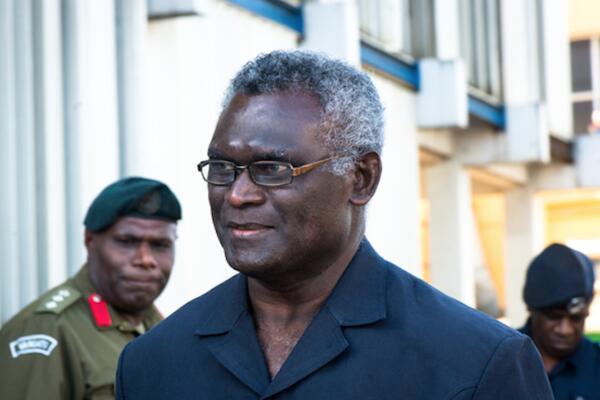 As to who has the numbers is anyone’s guess, although sources say if it were a conscious vote Sogavare would not have the numbers to survive the vote.
Source: SBM Online
By Samson Sade
Share
Monday, 06 December 2021 08:48 AM

After the looting and burning of Honiara the democratic process will now test the Sogavare led government’s mandate to lead.

Prime Minister Manasseh Sogavare has survived a tumultuous week, with angry mobs ransacking the nation’s capital Honiara, demanding his resignation. Sogavare stated that if he were to be removed it would be through the democratic process, on the floor of Parliament.

As to who has the numbers is anyone’s guess, although sources say if it were a conscious vote Sogavare would not have the numbers to survive the vote.

Opposition Leader Mathew Wale had alleged that the Prime Minister promised SBD$250,000 for Members of Parliament that remain loyal to his government. The money is said to be from the China funded National Development Fund (NDF).

The government issued a press statement denying the allegations, stating that the NDF is not new, and was in fact initiated by the Taiwanese government. The statement says China will discontinue the funding next year.

To date only four MPs from the government bench have resigned. The MP for West New Georgia-Vona Vona, Silas Tausinga, was one of the four government MPs that resigned.

He stated in an interview over the weekend that he left government based on principles, knowing full well that there were promises of cash payments for those that remain in government.

“From what I have heard in the last two days, it is not going to be paid until after (the vote). They are using it as a political tool, as leverage,” the MP said.

For now, there appears to be calm on the streets of Honiara thanks largely to a regional peacekeeping force led by Australia. Australia responded to a call for help by Prime Minister Sogavare, sending a 116-strong Australian peacekeeping force.

Other friends in the Pacific region also responded positively to Sogavare’s call, with 50 Fijian and 50 Papua New Guinean peacekeepers, and a newly arrived contingent of 65 New Zealand soldiers.

With reports from The Australian