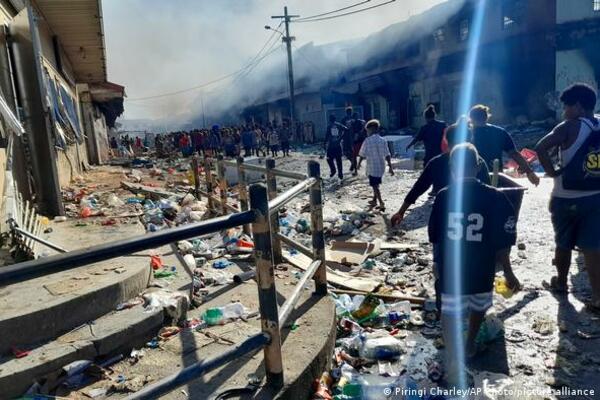 “The riots and unrest in the Solomon Islands has wider implications for New Zealand. Security within the Asia-Pacific region is increasingly complex and is of growing concern."
Source: Charly Piringi / AP
Share
Wednesday, 01 December 2021 09:02 AM

“Peace, stability and security of the Pacific is of utmost importance to New Zealand. We should be under no illusion that instability in the South Pacific has already caught the attention of the CCP, who cite the need to protect Chinese citizens and property in the Solomons.

“The riots and unrest in the Solomon Islands has wider implications for New Zealand. Security within the Asia-Pacific region is increasingly complex and is of growing concern.

“A country of New Zealand’s size depends on collective security. We need to show our friends in the Pacific that we will be there when they call.

“We are a small nation, but we should be a leading democracy in the region. Already this year, New Zealand was left out of a major defence pact between Australia, the UK and the US and the Government said it would take its own approach to foreign policy issues.

“A spokeswoman from the Minister for Foreign Affairs office said this afternoon that New Zealand has received a formal request for assistance from Solomon Islands Government, and that the Government is urgently looking at options to respond to this request.

“The Government has been aware of the unfolding situation since Friday. They should have been prepared for a request for assistance, and be ready to send our troops to provide support.

“As is often the case, our Government is reactive when it should be proactive. The Government needs to answer the questions, had it considered offering assistance to the Solomon Islands before assistance was sought?

“Why weren’t options put on the table when the Minister was first aware of unrest in the Pacific? What contingencies have been in place since New Zealand pulled out in 2017?

“When can the Solomon Islands expect the Government to respond to their calls for help, and when will our troops arrive?

“New Zealand needs to show that we can be counted on to uphold peace and stability in the Asia-Pacific."