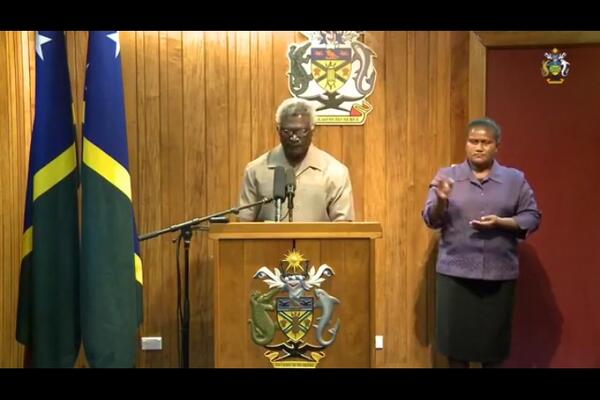 The Prime Minster said it is unfortunate that the information was leaked on social media before an official statement or clarification was made by government.
Source: STO
By Jimmy Nolan
Share
Tuesday, 30 November 2021 19:44 PM

Prime Minister Manasseh Sogavare has admitted that COVID-19 tests conducted on the visiting peacekeeping contingent has returned with some inconclusive results.

He said the tests were repeated and the results have since returned negative.

The Prime Minster says that the opening of our borders for the peacekeeping contingent carries with it risks, but assures the public that measures are in place to mitigate such risks.

Sogavare says that the visiting peacekeeping team are here on the invitation of the Solomon Islands government and all the participating countries have followed strict testing protocols before coming over.

The Prime Minster said it is unfortunate that the information was leaked on social media before an official statement or clarification was made by government.

Sogavare also revealed that a contingent from New Zealand will soon join Australia, PNG and Fiji in the coming days. This would be the largest peacekeeping intervention since the departure of RAMSI.