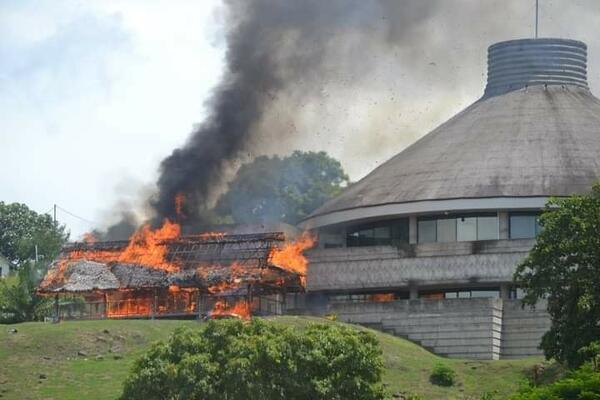 Two groups of protestors took to Parliament, one from the town council area up Vavaya ridge road, the other group from the foothills of Parliament from Point Cruz.
Source: Solomon Herald
By Samson Sade
Share
Wednesday, 24 November 2021 14:17 PM

What was supposed to be a peaceful protest is turning violent, with protestors attempting to storm Parliament, and reports of thick smoke coming from the Parliament compound.

Protestors gathered at the foothill of Parliament earlier today demanding they be let in, when they were refused entry, they became agitated. Police tried to control the crowd, but the crowd grew when others arrived mid-morning from Malaita.

The crowd pushed their way in, police and security officers manning the gates were outnumbered. Unconfirmed reports say tear gas was fired, in an attempt to disburse the crowd.

Parliament is currently in session, and reports say riot squads are keeping protestors at bay.

Two groups of protestors took to Parliament, one from the town council area up Vavaya ridge road, the other group from the foothills of Parliament from Point Cruz.

Members of Parliament from Malaita in government have been urging Malaitans to refrain from illegal protest. They have also blamed the Opposition group of inciting violence, although this has been refuted by the Opposition office.