Cabinet to Deliberate on Date to Reopen Borders: PM 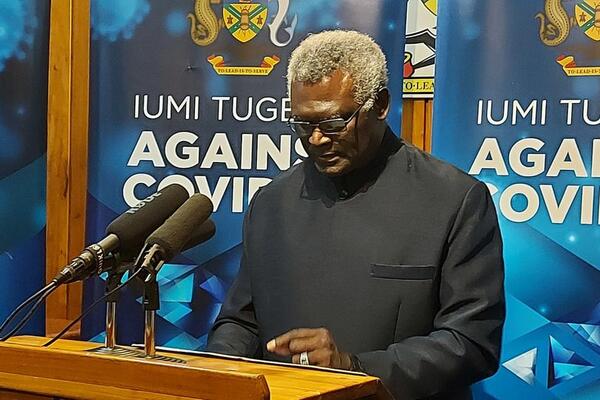 “The national Cabinet has set the target vaccination coverage to re-open our borders at 90 percent of the total eligible population of 414,327 people which is 372,895 people,” he said.
Source: Supplied
Share
Tuesday, 02 November 2021 07:05 AM

Prime Minister Manasseh Sogavare said Cabinet has directed the Oversight Committee to develop the framework for the reopening of our borders.

Speaking during his nationwide address, the Prime Minister said work towards the reopening of our borders is well underway with the establishment of a ‘Border Reopening Subcommittee’.

The Prime Minister said the subcommittee has been tasked to undertake the analysis and recommend options to be considered by Cabinet.

Prime Minister Sogavare said the Subcommittee is expected to submit its report to the Oversight Committee for presentation to the Cabinet for its deliberation and decision on a target date to reopen our international borders.

“The national Cabinet has set the target vaccination coverage to re-open our borders at 90 percent of the total eligible population of 414,327 people which is 372,895 people,” he said.

The Prime Minister said this level of coverage would provide adequate level of protection including for those that had not been vaccinated such as children under 18 years of age.

“We have seen many countries reopen their borders and are on the way to reestablish their economies that were shut down by the pandemic,” he said.

Prime Minister Sogavare said all countries that have managed to reopen their borders are doing so only because they have reached more than 75% full vaccination of their total eligible populations.

He said unlike many of the island countries including Solomon Islands, we are still focused on protecting our borders and limiting business and trading opportunities.
However, the Prime Minister has reiterated the Cabinet’s decision ‘that Solomon Islands cannot stay locked up from the rest of the world forever.’