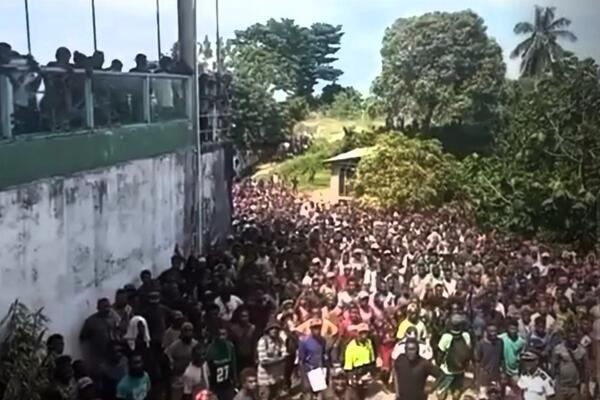 The crowd that gathered outside the motel used by the Opposition group.
Source: Malaita Issues (Facebook)
By Samson Sade
Share
Wednesday, 27 October 2021 12:12 PM

The mover of the motion against Malaita Premier Daniel Suidani told protestors that he has withdrawn the motion.

Protestors gathered outside the motel used by the opposition group demanding that the motion be withdrawn. The protestors said they will only disburse if they get confirmation from the mover of the motion that he has withdrawn the motion.

Police were present, controlling the crowd, no barricade or force was used as the crowd was animated but peaceful.

"Thank you for obeying our laws," said the mover of the motion Elijah Asilaua, speaking from the balcony where he and his group were staying.

"I had a dialouge with Premier Suidani last night and we spoke about this, it was to be withdrawn at the chamber today but since you are all here I want to say the motion is withdrawn," Asilaua said.

Asilaua said he will formalize the withdrawal today.