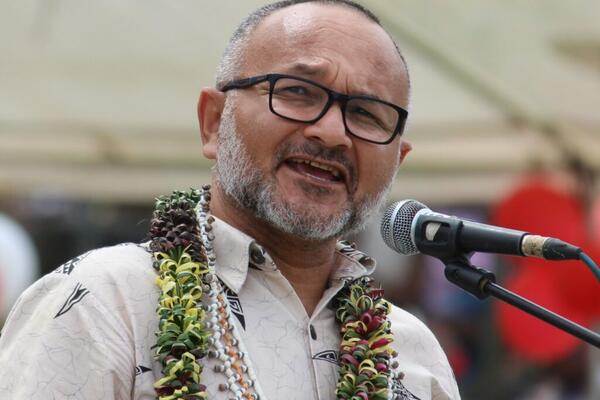 “The welcome accorded to Premier Suidani when he arrived in Auki demonstrates the overwhelming support from Malaitans from all parts of the Province is very clear."
Source: Supplied
Share
Wednesday, 27 October 2021 09:37 AM

The Leader of Opposition, Hon. Matthew Wale, has labelled the statement by the Prime Minister calling for Malaita leaders to resolve their political issues as hypocritical.

Hon. Wale said Prime Minister Sogavare has been hell bent on causing political instability in Malaita and has been single minded about removing Premier Daniel Suidani as Premier of Malaita Province.

The Opposition Leader said the Prime Minister made promises to these MPAs of benefits if they should succeed to remove Daniel Suidani as Premier.

Hon. Wale pointed out that it is the Prime Minister’s behaviour that is causing political instability in Malaita.

The Prime Minister recently said in Parliament that only a small minority in Malaita supports Premier Suidani and his position. Hon. Wale said, this could not be further from the truth.

“The welcome accorded to Premier Suidani when he arrived in Auki demonstrates the overwhelming support from Malaitans from all parts of the province is very clear. It is very clear to everybody the DCGA and Prime Minister Sogavare are fully intent on removing Daniel Suidani from the Malaita Premiership and to bring down MARA government, over and against the clear and overwhelming wishes of the majority of Malaitans. This is the cause of the political instability. Hon. Wale said the Prime Minister must refrain from causing further instability,” says Hon. Wale.

“As to peace and order in Auki,” Hon. Wale said “the people of Malaita are peaceful and law abiding citizens. If unprovoked, there should be no problems in Auki”.

He said his call for withdrawal of PRT officers from Auki was in line with that fear that a show of arms and force would be provocative.

“The people of Malaita know what is best for their province, and the Prime Minister and DCGA should respect them,” Hon. Wale said.

Source: Press Release, Office of the Leader of Opposition