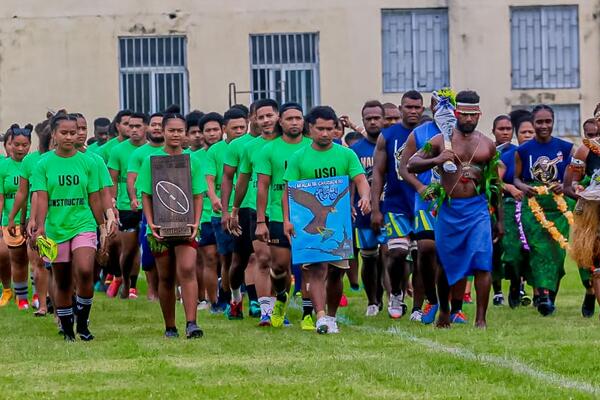 “The postponement is to honour and show our respect to the East Bellona community who lost one of their loved ones on Tuesday."
Source: Supplied
Share
Thursday, 21 October 2021 09:09 AM

The much-awaited game two of the Off-Season Challenge between Honiara based Malaita Crusaders Rugby Club and Eastern Highlanders of Bellona, has been rescheduled for Tuesday 26th October, 2021.

This was confirmed by the organisers of the Clash, who, in a statement, explained that the match day had to be moved to next week following the death of a family member of players from the Eastern Highlanders team.

“The postponement is to honour and show our respect to the East Bellona community who lost one of their loved ones on Tuesday.

“As games organisers, which is made up of officials from both teams, we have jointly agreed not to go ahead with today’s game until after the body of their loved one is taken home and laid to rest.

“As per the theme of this small challenge, it is our collective obligations to respect the different cultures we represent, and this is one of the key reasons why we bring together these young talents from the two provinces.

“To learn and understand each other’s’ cultures and traditions. Death has a big symbol in both our cultures and so we make sure the highest respect and honour is granted to those affected,” Organisers said in their statement.

Game two will therefore be held Tuesday 26th October next week, with the girls’ teams of both sides to start off the excitements with a 10s aside match. This is quite similar to 7s and a little feat of 15s. Gate opens at 3pm. First match to kick off at 3:30pm, followed by the main match at 4pm.

Organisers thanked supporters and fans of both teams for their understanding. We wish to also thank them for their turn out and support in game one, and we anticipate to see a much bigger turn out for game two next week.