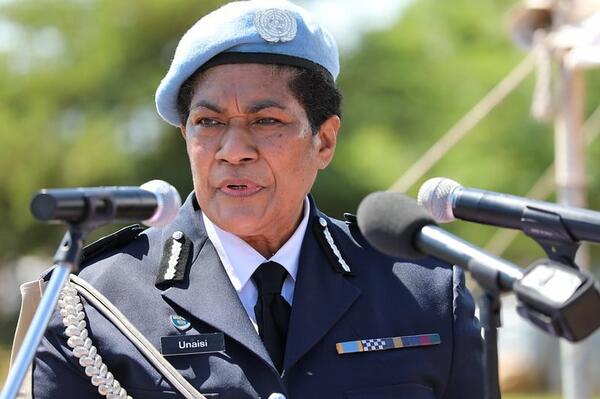 Ms. Unaisi Bolatolu-Vuniwaqa, who also served in the Solomon Islands under RAMSI, was the first woman to be appointed as Police Commissioner of the world's largest peacekeeping mission, UNMISS.
Source: UNMISS
Share
Thursday, 07 October 2021 07:52 AM

With emotion shining in her eyes, Fijian National and the first woman to be appointed as Police Commissioner of the world's largest peacekeeping mission, UNMISS, Ms. Unaisi Bolatolu-Vuniwaqa watched with pride as her police officers marched in tight formation before her in a special parade of honour to bid farewell to their leader.

It has been a long and challenging journey for the first female Police Commissioner to serve with the United Nations Mission in South Sudan, having risen rapidly in the past five years from an Individual Police Officer to Deputy Police Commissioner and then the top job.

“My 35-year police career, although challenging, has been the most exciting and enjoyable experience. The last five years with UNMISS has been the peak of resilience, hard work, and dedication, the result of which I will treasure for the rest of my life,” she told the crowd of senior police officers who gathered for her final day.

When Unaisi Bolatolu-Vuniwaqa was appointed, South Sudan was beginning a difficult transition from war to peace and recovery. At that time, UN Police were responsible for providing safety and security for more than 200,000 displaced families living in protection sites next to UN bases across the country. She has made a significant contribution to the transition of almost all of those sites to conventional displacement camps under the responsibility and protection of the Government of South Sudan.

“My heartfelt gratitude goes to the Inspector-General of the South Sudan National Police Service (SSNPS) for endorsing the collaboration between UNPOL and the local police that has manifested in the safe handing over of the role of policing in the redesignated protection sites, the training of SSNPS officers and other significant UNPOL programmes that have delivered concrete outcomes now and into the future,” she said.

Her senior officers paid tribute to her efforts to support them, the peacekeeping mission, and the people of South Sudan.

“She has made a distinguished and extraordinary contribution towards the progress of mandate implementation in South Sudan,” said UNMISS Police Chief of Operations, Francis Yiribaare. “She’s a woman of caliber who has touched all of us, police officers and senior management, and had an overarching effect on the entire Mission.”

The Police Commissioner said she felt honoured and privileged to have served with all UN police, military, and civilian personnel working to protect civilians and build peace in South Sudan.

“I would not have excelled in my capacity as your Commissioner if it wasn’t for your unwavering support in the delivery of our UNPOL mandate,” she told her officers.

“You have given exemplary service and contributed to the protection of people across South Sudan as well as building the capacity of our host police force to be professional, accountable and trusted. We may not have fully achieved all that needs to be done, but we must take heart from the milestones we have achieved today.”

The Commissioner urged her UNPOL colleagues to continue to be champions for gender parity and expressed her pride that UNMISS has the highest number of female police officers of all peacekeeping missions, with women comprising 35 percent of Individual Police Officers and 20 percent of Formed Police Units.

Today’s occasion was particularly poignant for Unaisi Bolatolu-Vuniwaqa. Not only does it mark the end of her service with UNMISS but also her retirement from the Fiji Police Force.

“As I fold my police uniform for the final time at the end of the day, I will cherish the thought of my family who have been constant throughout my life,” she said. “My husband, children and support network have supported me wholeheartedly in my quest to break ceilings in my career and made my achievements possible as a working mum and more.”