Total of 32 Arrested During Lockdown 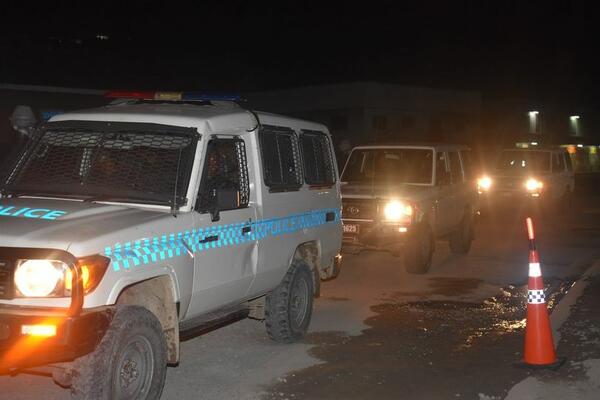 Mr Pogeava said despite the arrests, he is thankful for the majority of those in the emergency zone that cooperated, making the police operation a successful one.
Source: Supplied
Share
Wednesday, 01 September 2021 12:42 PM

The Royal Solomon Islands Police Force (RSIPF) says 32 people were arrested before the lockdown exercise closed at 6am, 31st August 2021.

Commander Pogeava said the suspect's age ranged between 18 to 35-years-old. He says of the 32 arrested two (2) suspects were arrested for brewing of Kwaso (homebrew) during the lockdown.

AC Pogeava said all the suspects were charged for restriction of movement under the State of Public Emergency (SoPE) regulation. The RSIPF investigators dealt with the suspects and they appeared in Honiara Central Magistrate’s Court this afternoon.

Mr Pogeava said despite the arrests, he is thankful for the majority of those in the emergency zone that cooperated, making the police operation a successful one.

“On behalf of all the officers who took part in the lockdown operation, I wish to thank you for all the positive feedback received on the work by RSIPF officers during the operation.

“I want to thank the RSIPF officers from Honiara City, Guadalcanal Police and other Departments within the RSIPF for supporting the operation and for your dedication and sacrifice for the safety and security of our people,” Commander Pogeava said.

He says the police will continue to assist the government to enforce the SoPE including in the emergency zone in Honiara and in the common border with Papua New Guinea and Solomon Islands and Malaita Outer Island.