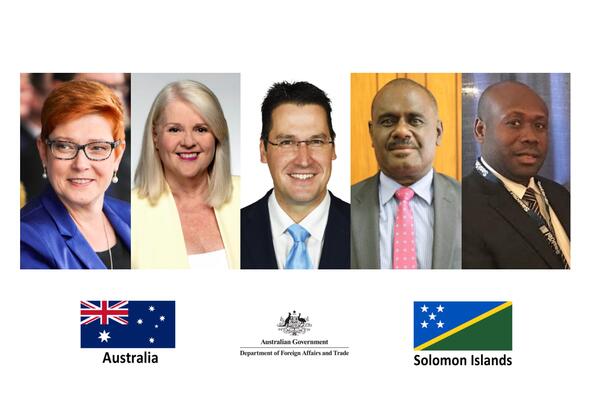 "Australia and Solomon Islands have a strong and steadfast friendship, built on shared values and regional interests and enduring community links."
Share
Friday, 27 August 2021 08:48 AM

Australia has agreed to fund the installation of six new mobile phone towers to support the Solomon Islands Government to improve the security and connectivity on its western border area by closing key communications blind spots.

The package was requested by the Solomon Islands Government as part of its COVID-19 preparedness and response efforts.

Australia’s Foreign Minister, the Hon Marise Payne, confirmed Australia’s funding for the project during a joint ministerial VTC on 25 August. Minister Payne was joined in the VTC by Solomon Islands’ counterparts, the Minister for Foreign Affairs and External Trade, the Hon Jeremiah Manele, and the Minister for Police, National Security and Correctional Services, Hon Anthony Veke, as well as Australia’s Ministers for Home Affairs, the Hon Karen Andrews, and International Development and the Pacific, the Hon Zed Seselja.

The six towers, capable of 3G and 4G connectivity, will be constructed across three provinces: four in the Shortland Islands in Western Province, one on Ontong Java in the Outer Malaitan Islands, and one in Kia in Isabel Province. The towers will utilise Ericsson mobile communications equipment, NEC microwave links and Australian-supplied towers. The construction package will be fully-funded by Australia. Our Telekom has committed to installing, owning, operating and maintaining the infrastructure as part of its broader mobile network. All six towers are expected to be operational by mid-2022.

Foreign Minister Payne said: "Australia is committed to supporting the Solomon Islands Government in its efforts to combat COVID-19 and strengthen border security. These towers complement our policing partnership, longstanding maritime and defence cooperation, and health security collaboration. They will build on our Coral Sea Cable partnership to increase connectivity to remote areas of Solomon Islands."

Minister Veke said, "In addition to improving border security, these towers will help the Government respond to natural disasters, improve service delivery and boost business opportunities for the communities in these border areas."

Minister Manele said, "Improving connectivity for people living in rural areas is a key priority for the Government. Our Telekom’s support for this package highlights the important role that the private sector can play in delivering game-changing infrastructure across Solomon Islands."

Minister Payne’s confirmation of Australia’s funding for the towers follows the several major bilateral initiatives in June, including the groundbreaking ceremony for the Western Border and Patrol Boat Outpost in the Shortland Islands, which will be constructed by the Australian Defence Force, the arrival of the second Guardian Class patrol boat, the RSIPV Taro, and the launch of Australia’s SBD$1.5 billion Solomon Islands Infrastructure Program.