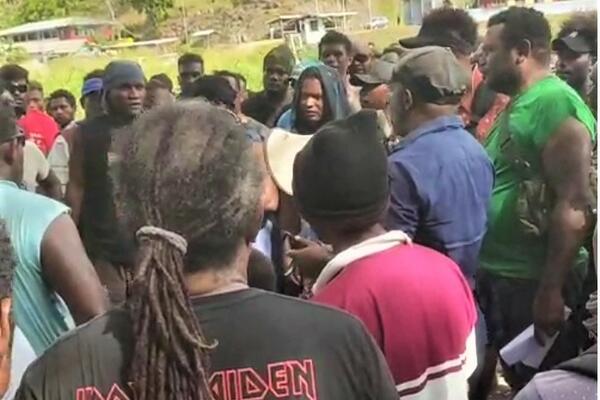 Police has also credited certain individuals present during the planned protest for calming the situation and dispersing the crowd.
Source: STO
By Samson Sade
Share
Tuesday, 10 August 2021 09:11 AM

After yesterday’s confusion caused by disgruntled protestors the police has assured the public that everything is under control and everybody should go about with business as usual.

As crowd gathered at the Kukum market area yesterday, schools in Honiara were forced to close early, emergency texts and emails were sent to worried parents to pick up their children.

The planned protest was triggered by a petition sent to the Prime Minister’s Office (PMO) with certain demands, which did not get a response from PMO within the timeframe of two weeks as contained in the petition.

Commissioner of Police Mostyn Mangau has assured the public that the situation is under control and reminded those who were planning the protest that their actions are illegal.

“The planned protest was illegal under the Procession Act and the current State of Public Emergency Regulation. The police will not tolerate such illegal activities that threatens Public Safety and National Security. The Police is on top of the situation and have adviced the organisers not to progress with any protest whatsoever,” Police Commissioner Mangau said.

He explains that when people want to stage a peaceful protest or wish to march through the streets of Honiara there are processes in place that must be followed.

He says that while the police recognise the right of citizens to protest peacefully it must be done within the bounds of the law and consideration must be given to public safety.

“Police have learnt from previous protests or even floats that though the majority of our protestors adhered to the conditions that were attached to the approval of their requests, some opportunists hijack the situation turning the otherwise peaceful intention into violence damaging properties and causing injuries.

“Once again, I want to assure the good citizens of Solomon Islands especially in Honiara that the situation in the capital city is ‘business as usual’ but police will continue to closely monitor the situation,” says Police Commissioner Mangau.