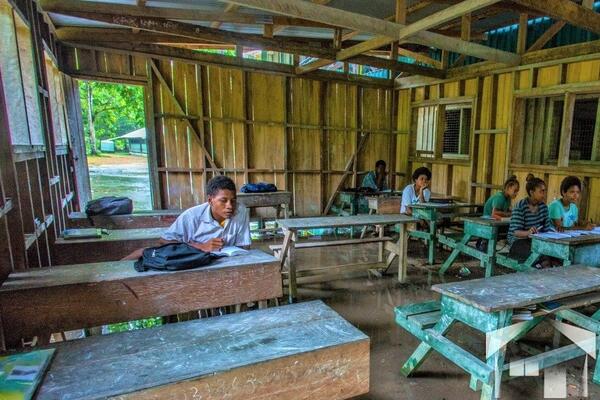 Despite the seemingly bleak situation on their island, people are still hopeful of a better future.
Source: Studio Home Grown Productions
By Georgina Kekea
Share
Thursday, 22 July 2021 10:03 AM

The outlying islands of Temotu are some of the worst affected from storm surges and sea level rise.

The Provincial Disaster Management Office (PDMO) has even listed this area as vulnerable to tsunamis.

But for the people, disaster risk reduction is not an option. While communities in bigger islands might be able to relocate easily due to risks associated with landslide, floods, tsunamis or coastal erosion, for the people of Reef Islands, there is no place else to move on the island.

“Very small islands, they don’t have gardens. They have very small spaces where they plant bananas. They have few breadfruit trees but mostly coconut trees. They live mostly by fish and coconut”, Edith Dagi of the Temotu Provincial Council of Women said.

Relocation is often seen as the only long-term solution and the people are hesitant to consider this option even in the short term.

In 2012, a case study by the Solomon Islands Red Cross in the Viakau ward in Temotu highlighted the numerous problems faced by the people of Pileni in the Reef Islands.

Many of the problems were related to weather and climate. High sea level events are one of the greatest concerns followed by declining fish stocks, water quality, agricultural production as well as the changing frequency of storms which were once easily predictable.

Frequent bad weather because of the prolonged monsoon season often results in damages to households and crops, mainly banana and breadfruit trees.

Despite changing weather conditions people on the island are adjusting, and many are turning to traditional practices to weather the storm.

People are now shifting to their traditional way of building houses, building close to the ground and using large coconut leaves and heavy branches to increase structural weight of roof tops.

“We must not forget our traditional way of doing things. The houses are built low, with the leaves tied closely and coconut leaves placed on top of the roof during bad weather. The houses last longer. I think we should consider how old people lived in the past”, Edith said.

While their homes maybe secure, their livelihood and ability to earn a decent income from natural resources is being threatened. Fishing patterns have shifted, and because there is no way for them to store such perishable food – fuel is often wasted since they have to fish every day.

“The fish cannot be kept fresh as they are not stored in cool temperatures. So the little amounts of fish they catch go bad very quickly, and the fishermen losses more than just potential income, they start to lose confidence in their natural resources as a means of sustaining their food security,” Edith said.

Despite such challenges, the communities have shown that they are resilient, especially to natural hazards.

“One thing about these people is that they do not complain. You will hardly hear them complain at all”, Edith said.

Meanwhile,Temotu Premier, Mr. Clay Forau, has recently called on the government to support the people of the low lying islands of Temotu.

On the occasion to mark the second appointed day of Temotu Province, Mr. Forau said, “the people from our low lying islands need support either to mitigate or relocate to a safer location”.

“Just close to where we are standing, out in the Reef Islands, climate change is no longer a metaphor, it is real. It is happening right before our eyes as we speak. Land is eroding and the land area of this province is slowly reducing. So while the population is increasing, our land space is decreasing”, Forau said.