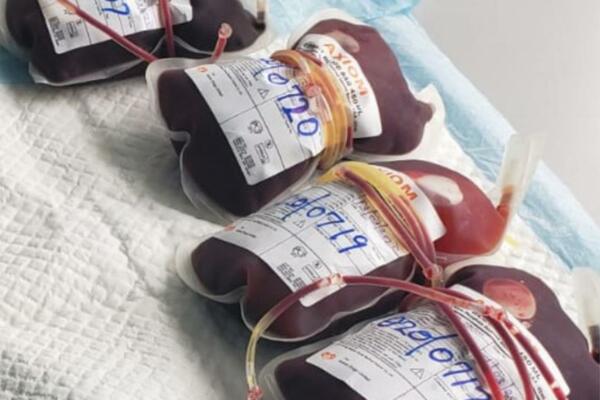 The Solomon Islands Red Cross Society is the only organization that has a blood donor voluntary program. Civic awareness on the importance of blood donation is an on-going activity for the Society. However, the fear of needles and sight of blood is an enduring challenge for them.
Source: File: WHO
By Georgina Kekea
Share
Tuesday, 13 July 2021 09:07 AM

“They cannot give you blood transfusion unless somebody donates blood for you”, Mike (not his real name) tells of his wife's plight, who was a cancer patient.

The diagnosis for Mike’s wife was reached in December 2020 after earlier prognosis made by clinical nurses pointed to a Sexually Transmitted Infection (STI).

As a young couple, Mike and his wife were deeply affected by the prognosis as this meant one had been promiscuous in their relationship to get such an infection. However, what they failed to realise was that they were the early signs of cervical cancer.

“By the time my wife got tested and the results came back positive for cervical cancer, she was already in stage two of that illness”, Mike said.

In December a doctor’s conference was held for the couple, relaying the bad news that Mike’s wife was diagnosed with stage two cancer and had to undergo treatment available for them at the National referral hospital which was chemotherapy.

“We were told that she will lose a lot of blood and that we have to prepare ourselves for this journey”.

The journey proved to be very challenging as the issue of blood transfusion and lack of hospital beds became major obstacles to their treatment.

“During our fifth admission, it was on a Sunday. The blood bank closes over the weekend. My wife lost a lot of blood and she was so weak. We could not get a bed in the gynae ward because it was full. So, my wife just slept on the hospital floor in the emergency outpatient area,” a distraught Mike recalled.

“She kept on losing blood and blood was all over the floor and people kept staring at us. I was getting frustrated as I believed my wife was in dire need of a bed and blood transfusion. The doctor told us that since no one has donated blood for my wife, they cannot give her the pint of blood that she needs. We will have to wait until Monday when she receives blood donations under her name before they will give her the transfusion she needs.”

He said what he failed to understand was the priority order of patients in such circumstances.

“I am a taxpayer of this country and so was my wife. Every fortnight we got deducted tax which should run into thousands of dollars by now and this was how they treated us for our contributions?” Mike questioned.

In another case, Claire, a young mother of two had an abnormal growth removed from her uterus. She also shared the experience she went through for blood transfusion.

“I kept losing blood and I relied heavily on my friends and family to donate blood for me. At one point I nearly died. I lost a lot of blood and I just lost consciousness because of the blood loss. I have to post on my Facebook wall calling for people to come donate blood for me when I need a blood transfusion. I have no choice. It was an experience I do not wish to happen to anyone”, Claire said.

The blood bank at the National referral hospital is always short of blood. To cater for the demand of patients in the hospital, they need at least 20 consistent blood donors every day.

Emergency situations where one needs blood is out of the question.

“The blood transfusion service at the national referral hospital is facing a lot of difficulties”, surgeon Dr. Rooney Jagilly told local journalists in a press conference on bed shortages at the National Referral Hospital.

“I think the public’s attitude is usually not forthcoming. When blood donation teams go out, they have difficulty getting the public to come on board. The public relation system is usually very hard so that is compounding the problem at the blood bank.

“Not ideal but what usually happens now is that relatives and friends give blood to patients. For the weekend, if the caring doctor is really insistent that somebody requires blood transfusion that is going to change the management of the patient after hours or weekend hours, then the blood transfusion team should be able to come and provide that service”, Dr. Jagilly said.

The Solomon Islands Red Cross Society is the only organization that has a blood donor voluntary program. Civic awareness on the importance of blood donation is an on-going activity for the Society. However, the fear of needles and sight of blood is an enduring challenge for them. People usually do not come forward to voluntarily give blood because of those reasons alone.

For the National referral hospital, shortages of blood at the blood bank is a major contributor to patients not able to undergo surgery or receive timely blood transfusion.

Since the issue of bed shortages at the national referral hospital was highlighted in the media recently, the blood bank operations have also stepped up in the services they provide.

“Not getting timely blood transfusion is also a contributing factor to the shortages of beds at the hospital’s emergency area”, CEO of the national referral hospital, Dr. George Malefoasi said.

He said since the changes in hospital systems to address the issue of bed shortages, staff at the medical ward are now expected to work eight hours shifts a day.

“In the past they only responded to calls. Now they are working eight hours shift a day seven days a week to address such issues”, Dr. Malefoasi said.

Claire has since recovered from her fibroid operation but continued to live with the trauma of her near-death experience.

“I think God still has a purpose for me, which is why I am still here. I am thankful to those who have donated their blood that contributed to my living testimony”, Claire said.

Mike’s advice to young mothers, girls and women however is for them to get regular checks for diseases such as cervical cancer’.

“For stage two cancer my wife needed radiotherapy in addition to her treatment but we do not have that here in Honiara. It is very expensive to get treatment overseas”, Mike says.

He says getting early diagnosis is the only key to fight cervical cancer in Solomon Islands.