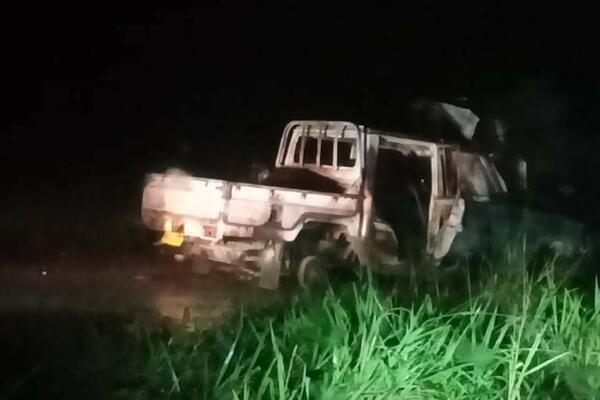 Five people were confirmed fatalities of a roadside accident on Independence Day.

Supervising Provincial Police Commander (PPC) Guadalcanal Province, Superintendent Edwin Sevoa said the fatal accident involved a land cruiser traveling easterly direction towards the Tenaru Bridge and run through a group of people who were doing a fundraising in front of the old Tenaru Bridge.

On their way up to Tenaru Bridge, the driver of the land cruiser saw an incoming vehicle on the Bridge and parked vehicle at the western end of the Bridge, so the driver decided to drive through the old Tenaru Bridge where a fundraising was happening.

Superintendent Sevoa says, the vehicle drove straight towards the crowd, hit several of them and later stopped. The driver of the land cruiser had escaped after the fatal accident and was later arrested with his associate. Some unknown person later burnt down the land cruiser into ashes.

Mr Sevoa said a traffic case was established and investigation is currently on going.

"I call on parties involved in this sad incident to refrain from taking the laws in to your hands and allow police to deal with the matter so that those responsible could face justice."

“Our condolences to the family and relatives of the deceased for the loss of their loved ones,” said PPC Sevoa.