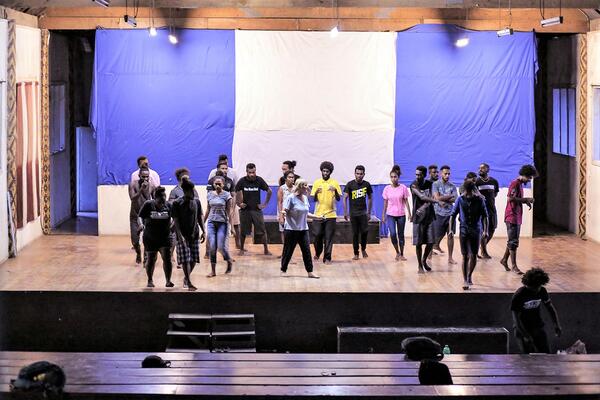 The Chief's Son cast went through three months of rehearsals for the five-day show.
Share
Thursday, 03 June 2021 10:06 AM

Dreamcast Theatre Solomon Islands are set to stage one of their biggest theatre play yet; The Chief’s Son.

Based on William Shakespeare’s The Tragedy of Hamlet, The Chief’s Son is set to give local audiences a relatable feel to the perennial classic – re-scripted with a Pacific tone.

The show is set to be performed at the National Museum Auditorium on five separate occasions from 11 – 15 June.

Dreamcast Theatre in a statement today while promoting the show, said The Chief’s Son is the product of three months in intense preparations and a milestone achievement for the young theatre group.

The Chief’s Son involves a blend of the original script settings and English-speaking characters while adapting local concepts familiar to Solomon Islanders.

Dreamcast Creative Director, Neil Nuia says local audiences and Shakespeare fans will love this Hamlet rendition that retains the complexity of the characters and relives the melancholy, bitter, and cynical plots.

“But I think the bigger picture here is how The Chief’s Son will help in our development as a theatre company in the region, the young actors and artists involved and of course the influence it could have on the wider scope of the arts industry in the country,” Neil says.

He says their biggest supporter at the moment, is sheer passion.

“So far, we do not have any major support outside of Dreamcast to financially push us in this project, but this is not something we’re not used to. We will use whatever means that we have because most of the time we’re doing this voluntarily.”

“This is why I have so much respect for all my young colleagues involved. They have sacrificed a lot to get us this far.”

Neil urged the public to show their support for the young actors and artists involved in The Chief’s Son, who had gone through exhausting daily rehearsals over the past three months.

Tickets are currently selling at $50 for adults, $30 for children and free entry for children under the age of nine.

The Chief’s Son is written and directed by Rosalind Lawry, a New Zealand theatre director who has a wealth of experience in professional creative and performing arts.

Rosalind is in the country accompanying her husband but had volunteered to work with Dreamcast Theatre.

“Dreamcast actors share these things with every other actor in the world and putting them into practice is also the same. Rehearsals after rehearsals getting it right, getting it wrong and more rehearsals,” Rosalind says.

“The cast of The Chief's Son have claimed this story, navigating their journey with all the passion and fun that a tale inspired by a Shakespearean character deserves.”

Chief’s Son lead actor Quinzy Kwahn who stars as Malo – the Hamlet equivalent – says the cast are really happy to work with Rosalind and have used the opportunity to learn as much as they can.

Although it comes with challenges, the 27-year-old admits.

“Most of our shows are usually done in our native pidgin, but with The Chief’s Son, it’s a full English script. Actors will need to throw in that extra effort in speaking a language out of our comfort zone.

“I’m not saying it’s a bad thing, it’s actually good for us. It’s a good challenge that will help us grow.”

The mission of Dreamcast is to create a space for young people to dream, explore and further their passion in Creative and Performing arts as a catalyst for personal development and issues they care about.