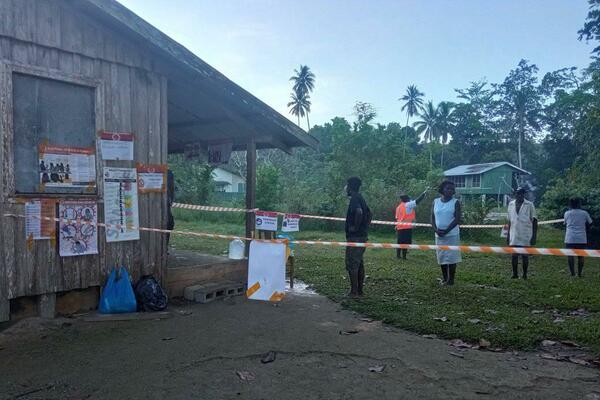 In South Choiseul, people have been flocking to the Polling Stations since 7am.
Source: Gina Makaá
By Georgina Kekea
Share
Wednesday, 19 May 2021 07:22 AM

Today is polling day for electorates in South Choiseul, Kirugela ward in East Choiseul and Anuta/Tikopia ward in Temotu.

Reporting from Tikopia, Jeremy Gwao says all is peaceful ahead of the provincial by-election in Tikopia. He says preparations had been on-going for some time prior to the by-election.

“People are happy and looking forward to this day to come to the polls. Yesterday we paid a courtesy visit to the chief and he said he was also quite happy and looking forward to this day. We have police officers here on the island to oversee the by-election process. Two officers were deployed to Anuta while four police officers remained on Tikopia to oversee security here on the island. On Tikopia island there are two polling stations while only one polling station on Anuta” Gwao reported.

Meanwhile in Choiseul, Gina Maka’a from SIBC reported this morning from Sasamunga that COVID-19 rules are observed in the voting process.

She said hand washing and social distancing rules will be observed throughout the day.

“Voting started at 7 this morning and people are starting to flock to the polling station to cast their votes”, Ms. Maka’a said.

She said the environment is peaceful and calm prior to polling day.

The former MP for South Choiseul was ousted on bribery charges through an election petition lodged by the former Premier, who is now a candidate in this by-election. Six candidates are contesting the South Choiseul constituency seat.

Meanwhile, the by-election for Kirugela ward in East Choiseul was imminent, following the death of its MPA while the MPA for Anuta Tikopia ward was terminated.

Polling closes at 5pm this evening.