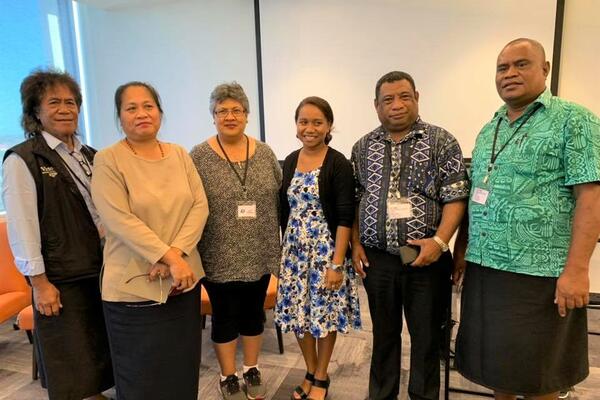 As we join the global community in marking the UNESCO 2021 World Press Freedom Day today, the Pacific Islands News Association (PINA) acknowledges the great sacrifice and commitment of our media workers in covering the COVID19 pandemic and related issues.

While our health workers have been rightfully recognised as ‘frontliners’ in the fight against COVID19, the critical frontline efforts of our media workers in bringing much-needed information and news to our people has been largely forgotten.

Much like our health sector colleagues, our media workers go about their daily work, also at high personal risk and exposure to this virus, but with the unwavering desire to inform and educate our people.

In some countries where the media is not considered a priority frontline group for vaccination, we urge these governments to vaccinate journalists to ensure they can continue to work without having to fear for their health and their lives.

Apart from personal risks to their health, our journalists are also having to deal with dangerous inaccuracies and misinformation about COVID19 from social media and from members of the public.

Some countries impose new restrictions like censorship, abuse and harassment to try and control and silence media workers from doing their job.

PINA uses today’s occasion to acknowledge and appreciate your excellent efforts, with a particular mention of our PINA regional media family members.

We stand with you and salute you all!

If not already done by our regional governments – any form of compensation to our health workers on COVID-19 - must also extend to our media workers and employers.

Like every other sector, the media industry is also experiencing some challenging times.

PINA also wants to use this special day to pay tribute to our colleagues who face intimidation or harassment, or have been injured or, tragically lost their lives while in the frontline of reporting to keep authorities transparent and accountable.

We also salute five regional media colleagues, we’ve lost recently. We remember them today for their tireless and immense contribution to the Pacific media fraternity.

1. Mr Ricky Binihi, a well-known investigative journalist in Vanuatu, with over four decades of journalism experience, working with Vanuatu Broadcasting & Television Corporation (VBTC), Vanuatu Daily Post and the Vanuatu Weekly. He was one the pioneers of journalism in Vanuatu after independence in the 80’s. He died in January this year.

2. Ms Glenda Popot, was heavily involved in the development of the electronic media, especially EMTV in Papua New Guinea. She worked with FM100 as its Editor before her death,

3. Mr Alphonse Muapi, worked with the national broadcaster in Papua New Guinea, NBC before joining the Electoral Commission. He was considered an asset and bridge between the media and the Commission, during the conduct of PNG’s most immediate past two national general elections.

5. Mr Poliakepo Kefu – the Secretary of the Media Association of Tonga (MAT). The president of MAT, Mr Ramanlal Vallabh said Mr Kefu was an active member and supportive member of MAT and his demise is a huge loss to the media family in the island kingdom.

At the same time, we send our congratulations to Mr Johnson Honimae who has returned to the mainstream media in Solomon Islands after almost 20 years to head the national broadcaster, the Solomon Islands Broadcasting Corporation (SIBC). Mr Honimae was former President of PINA in the early 2000.

Our congratulations also goes out to the new President of the Journalist Association of Samoa (JAWS), Ms Lagi Keresoma, who was elected last Friday. She becomes the first woman to head JAWS, replacing Mr Rudy Bartley. We acknowledge all your sacrifices and determination in the pursuit of “Information as a public good,” which is also the theme of this year’s World Press Freedom Day.