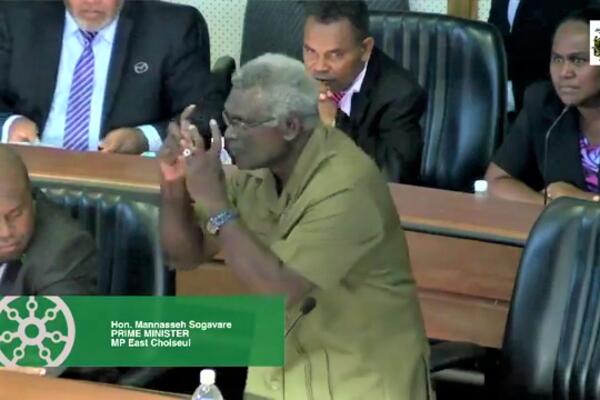 “They need to come and sit down and talk with us. Or you go and see what is happening in the constituencies. You will be amazed”, Sogavare said.
Source: STO
By Georgina Kekea
Share
Monday, 26 April 2021 08:47 AM

Sogavare’s comments were made in response to criticisms made by Transparency Solomon Islands (TSI) on the Constituency Development Funds (CDF).

TSI recently in a statement said they are concerned to see the increase of the CDF to SBD$6.8 million. TSI says this is the second highest CDF allocation for the constituencies through their Members of Parliament (MPs).

“To allocate this amount of money for the Constituencies at a time when the country is going through an economic and health crisis is very irresponsible of the MPs, regardless of which side of the house they are in”, TSI said.

TSI said to allocate such an amount to go through this ‘failed and very corrupt scheme’ at a time when the country needs to address the health crisis by way of doing something about the delipidated state of health and medical infrastructures is beyond understanding.

But the Prime Minister in his speech in parliament says he is interested to know where TSI is getting its resources. He said TSI has asked the government to be transparent and they are being transparent.

“This is too much. We do not hide to tell them what we are doing. But the organization who is supposed to be transparent is not transparent. Who is funding them?”Sogavare questioned.

TSI is a not-for-profit organization committed to fighting corruption and promoting transparency, accountability and good governance in Solomon Islands. Their focus is on the public, private and civil sectors. TSI relies on funding from members and donor organizations both in Solomon Islands and abroad to do their work.

Sogavare said those who continued to criticize the program cared very little, and need to take time to understand the policy rationale behind such programs.

“They need to come and sit down and talk with us. Or you go and see what is happening in the constituencies. You will be amazed”, Sogavare continues.

In addition the Prime Minister also raised his disappointment in the conduct of the premiers of Malaita and Guadalcanal.

“If that is not enough, the premiers of Malaita and Guadalcanal provinces who were supposed to be agents of the national government also join forces to challenge the government. Bring it on”, Prime Minister Sogavare says.

It is understood that the Provincial secretary of the Malaita provincial government is taking the government to court over his suspension. His court hearing will be on the 30th of this month.

“My advice to some of these entities is that people who live in glass houses must not throw stones. Don’t do that. You might break your own houses”.

Sogavare was responding to the 'speech from the throne' in parliament when he made these comments.