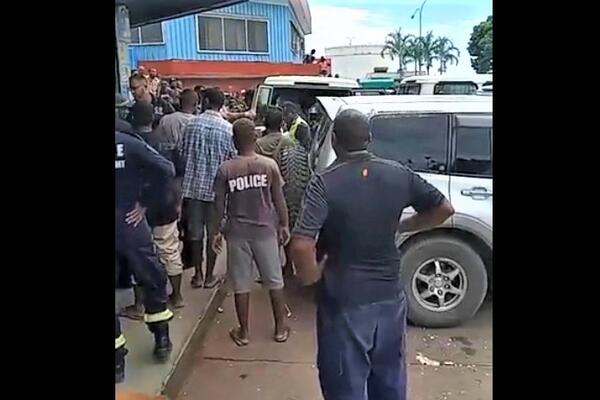 The scene of the crime, body of the young female shop owner taken away by the police forensic team.
Source: SBM Online
Share
Thursday, 15 April 2021 08:22 AM

The Government has issued a statement denouncing the brutal nature of the death of a female Chinese national in Honiara yesterday and vows to bring the perpetrator(s) to face the full force of law.

“The Government’s law enforcement institutions will not rest until those responsible are caught and punished,” the statement said.

The Royal Solomon Islands Police Force investigators were prompt to pronounce, after initial investigations, that the death was ‘suspicious.

According to Police, the 44-year old deceased met her fate on the morning of Tuesday 13 April when she arrived to open her shop for business at the White Angel building in the heart of Honiara city.

Her body was discovered in the shop covered with blood behind locked doors when her husband with assistance from another person gained entry into the shop.

“The Government denounced the act as grossly senseless and unacceptable,” the statement said, adding, “the full weight of the law will apply on whoever is responsible for the suspicious death”.

The Government conveys its sincere condolences to the family during this devastating time.