“Discharge Your Mandate Without Fear or Favour:’’ Governor General 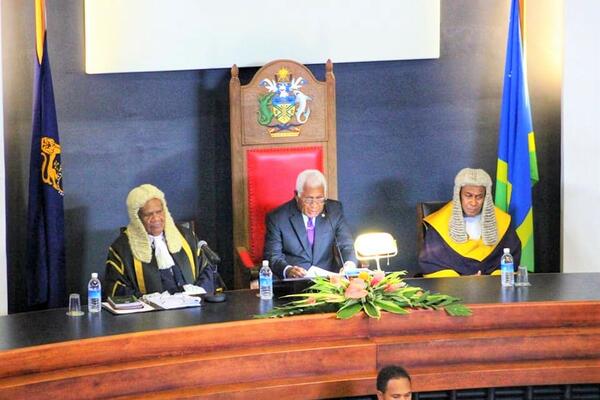 “This is an overwhelming and ethical responsibility that needs sound guidance, ethical leadership and requires a clear vision. I trust that you will discharge your duties with due diligence and integrity."
By Jimmy Nolan
Share
Tuesday, 16 March 2021 09:17 AM

The 4th Meeting of the 11th Parliament has commenced with the traditional Speech from the Thrown by the Governor General, His Excellency Sir David Vunagi.

Like other countries in the Commonwealth, the Speech from the Throne opens every new session of Parliament. Traditionally the speech introduces the government’s direction and goals and outlines how it will work to achieve them.

Sir David used the occasion to remind elected representatives of the important role they play in advancing the interests of the country.

"I take this opportunity to encourage and remind Ministers of the Crown to discharge your constitutional mandate with integrity and statesmanship. The future of our beloved country depends on your sound judgement and vision in leading our country forward into the future. I pray that you will rise to the occasion and deliver on your policies for the good of this country.

"Likewise, may I also encourage the Hon. Leader of the Official Opposition as the leader of the alternative government, to exercise the check and balance functions of the Opposition Office in a rigorous but responsible and ethical manner. The Official Opposition plays an important Constitutional role in ensuring that the Government held accountable, transparent, and attentive in its decision making and in the discharge of its constitutional mandate in leading and governing our people.

"By the same token, I wish to encourage the Leader of the Independent Group to continue with the good work that you have done so far in representing a balanced and constructive view on national issues of public interest.

“The Office of the Leader of the Independent is a Constitutional Office that is independent of both the government and the office of the opposition. It is my prayer that you continue to advocate for the national interest by independently discharging the functions of your office without fear or favour whilst ensuring that both the Government and the Official Opposition are held accountable in the discharge of their constitutional mandate,” the Governor General said.

Sir David also encouraged all Members of the National Parliament to discharge their constitutional mandate without fear or favour.

“This is an overwhelming and ethical responsibility that needs sound guidance, ethical leadership and requires a clear vision. I trust that you will discharge your duties with due diligence and integrity.

“I would also like to remind all Solomon Islanders of our national motto, as we commence our 4th meeting of the 11 th Parliament, that is, "To Lead is to Serve". May we all lead and serve our people with God's guidance and wisdom,” Sir David said.