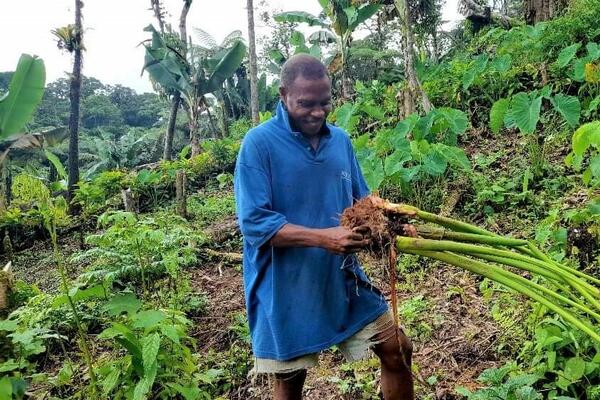 While some are pressuring their MP to pay for their children’s education there are those that work hard to put their children through formal schooling.

Peter Ba'e is a hard-working father of three young boys who lives at Busurata village in Central Kwara'ae, Malaita province.

Peter is now in his early 50s but says he still has the energy to sustain his family.

He is proud of what he has achieved, with just the soil to toil and sheer hard work he has put all his sons through formal education – something he was not able to do as a young man.

He says that growing up in the highlands was a blessing for him, he decided early on that the only way he can support his family is to do what he is good at, which is farming – and he must commit to it.

He cleared a big patch of land and started farming taro, and as the years went by, he expanded his farm slowly. He would take the long trip to Auki market and sell his taro produce, bought what his family needed at the shops and returned home. His number one aim is to put his sons through formal schooling, so he saved whatever money he made.

All his sons attended Busurata community school, which made it easy for him as it was not too far from their house. He said he is proud to watch his sons grow and attend school, knowing that it is because of his sweat and hard work.

His first-born son is now in form three, the other form one and the last one is in primary school.

"This year would be a very tough year for me since my children are now going up to the higher levels, and I know I must work extra hard to support them.

"My first-born son is now in form three, so I will expect many requests from the school in terms of money," Peter said.

"I love my job being a farmer so it is ok, I will continue to work hard for them, that is what parents must do so that their children can do better.

"I want my kids to have a bright future and learn from my struggle.

"I have planned ahead so I will be able to meet the needs of my children as they attend school, it is sometimes a struggle, but it is for my sons."

Peter has already planted a new batch of taro November last year, just so that he could harvest and sell his produce at the market when school resumes.

Peter is a well-known market vendor at the Auki main market – always there with a smile, proudly displaying his taro from Busurata in the highlands of Central Kwara'ae.