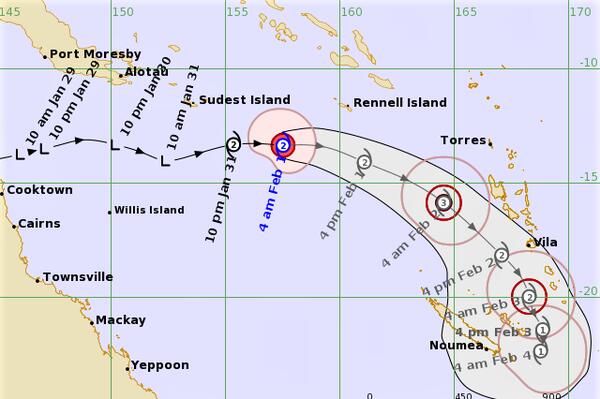 Heavy rainfall and strong winds may develop today afternoon and evening, but is expected to subside as the system moves towards Vanuatu.
Source: cairnspost.com.au
By Georgina Kekea
Share
Monday, 01 February 2021 08:49 AM

A tropical cyclone warning is in place for the people of Rennell and Bellona province, southern side of Western province, Russells, Guadalcanal and Makira.

Tropical Cyclone (TC) Lucas is said to be gaining strength and the weather office is warning fishermen and those travelling by sea that significant swells of 3 to 4 metres are expected.

Now at category two, TC Lucas is the third for this year in the Pacific region.

TC Lucas is expected to intensify in the short term before beginning to weaken and transition into a subtropical cyclone around Tuesday.

Heavy rainfall and strong winds may develop today afternoon and evening but is expected to subside as the system moves towards Vanuatu.

The Global Disaster and Alert Coordination System says the cyclone can have a low humanitarian impact based on maximum sustained wind speed but placed Solomon Islands as vulnerable to it.

The Solomon Islands met office says people must be extra careful during such bad weather conditions and should consider safety as their number one priority.

The next two months are peak season for tropical cyclones within the region.