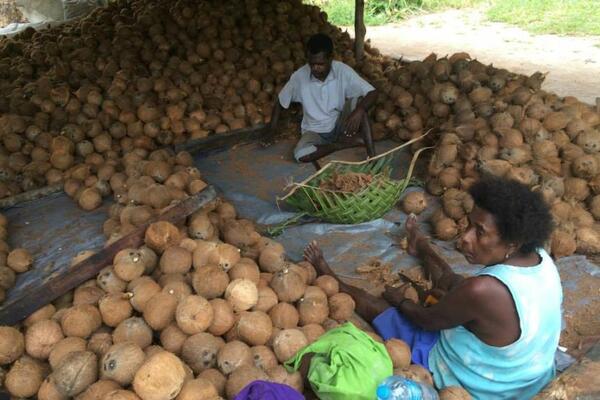 Despite their importance to the national economy and to rural households, there has been little investment in coconut production in recent decades.
Source: File: ABC
By Georgina Kekea
Share
Wednesday, 09 December 2020 09:44 AM

Prime Minister Manasseh Sogavare revealed this in parliament prior to adjourning sine die.

Coconuts and copra are the longest standing commercial smallholder income generating activity in the country. It is said to be the most widely distributed crop in the country and form a key part of almost all farming systems in all the nine provinces.

Despite their importance to the national economy and to rural households, there has been little investment in coconut production in recent decades.

“Great that the government is supportive of the productive sector through which most of our rural communities depend. However, implementing it is not so easy” Bob Pollard of Kokonut Pacific Solomon Islands (KPSI) Ltd. says.

“The economic infrastructure is fundamental to assisting - that is effective transport, communication, financial systems, tax and the regulatory framework. Doing business in the current Solomon Islands context is not easy, it should be easier”, Pollard told Solomon Times Online.

Copra used to dominate trade in coconut in the past. However, the decline in world trade of copra, volatile prices, and high cost of transportation mean that there are low margins for all throughout the value chain.

Growers are said to be increasingly on the lookout for higher value markets to sell their coconuts; or when there are options, they then shift to other income earning activities. More companies are reported to look for niche and higher value markets (organic) or looking at value addition for more opportunities.

“Direct investment by the government is challenging. Do no harm is the first principle of development”, Pollard says.

He says maintaining a level playing field is also important for the government agents.

“Working together with all genuine stakeholders is the best way forward”, Pollard says.

Meanwhile Prime Minister Manasseh Sogavare says he is pleased to announce that some Members of Parliament (MP) have already ventured into coconut value adding by assisting their constituencies to establish processing centres for their coconut, rather than copra which is very labour intensive.

“Thanks largely to the introduction of the much-criticized ESP rollout”, Sogavare told parliament.

He says DCGA will partner with development partners to invest in economic infrastructures such as Biosecurity facilities to strengthen the country’s capacity to export agricultural raw products abroad.

“Government should be commended for recognizing the priority”, Pollard says.

He however says it needs real wisdom in implementing.

“Our propensity for corruption in the dispersion of government funds is high”, Pollard says.

In addition to coconut, in the productive sector, the Prime Minister also has promised to ensure that the Kirakira Cocoa Oil factory is completed in 2021, Bonale pineapple factory is constructed in 2021 and a cassava flour mill is established on Guadalcanal for export of cassava flour and livestock feed.

Sogavare says while pursuing downstream processing, the government will continue to ensure that export of raw agricultural materials such as taro, cassava and copra are not impeded.

“Some of these development initiatives will require partnership with the private sector hence, the government is formalizing the public private partnership (PPP) approach as one of the many approaches that DCGA will utilize to implement its policy redirection”, Sogavare told parliament recently.