An Exciting Start to the 2020 Solomon Cup 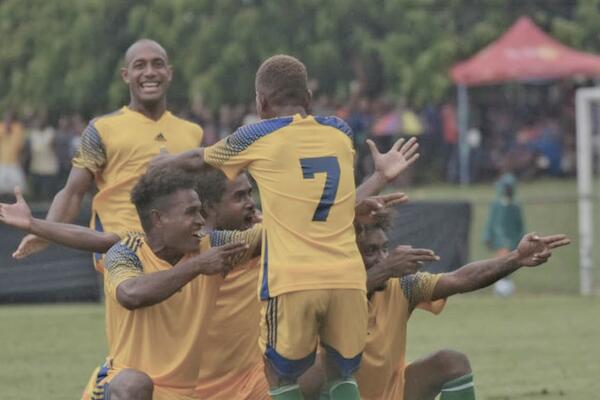 After two years the Solomon Cup once again grace the Lawson Tama stadium.

Malaita Eagles battered Choiseul Kukuvojo to conclude Group A matches. The defending champions Malaita Eagles registered their first three points with a big win against the Lauru Kukuvojo side with a margin of 5-1.

Sundays match saw Makira Ulawa Kakamora and Isabel Frigates come out as winners in Group B.

Solomon Games gold medalists Makira Ulawa Kakamora started the first match on Sunday on the front foot despite finding it difficult to open up a determined Renbel Ibis side in the first 10 minutes.

Persistent pressing from Kakamora saw George Hanua break the deadlock with a smart finish in the 16th minute and Steward Hagatepu added a second shortly after to lead 2-0 at the break.

Hanua and Hagatepu scored a second goal in the second half before veteran forward Nicholas Muri came off the bench to notch in a goal to wrap a huge win for the Kakamoras.

Hosts Honiara Warriors and Isabel Frigates contested a goalless first half in front of a huge crowd despite the down pour later in the afternoon.

Second half substitute Franster Rukumana put the Warriors in front in the 82nd minute with a likely match winner only for Isabel to put on a thrilling comeback performance moments later.

Mostyn Kelly drew level for Isabel with a clinical finish five minutes from time before Obed Havimana turned the game on its head with a near post finish.

Captain Samuel Osifelo put the icing on the cake with a late goal in the added time to seal a memorable win for the Frigates.