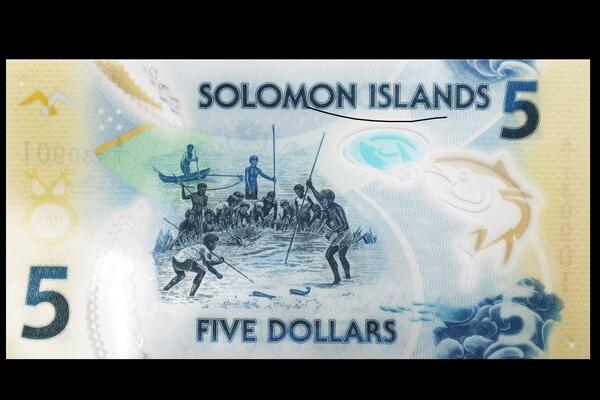 The award was one of three given out as part of IACA’s Excellence in Currency Technical Awards, which is staged every two years.

“It is pleasing to know that our 5 dollar polymer banknote has been recognised, especially for this new security feature SUSI Flip which is the first of its kind in the world,” says CBSI Governor Dr. Luke Forau.

“I’m very happy for this announcement and I’d like to thank Note Printing Australia for a marvelous job. We look forward for continuous collaboration with NPA.”

The iconic Solomon Islands’ note was one of five finalists and in the company of other finalist nominations from the Reserve Bank of Australia (who developed a security feature with the Walt Disney Company), the European Central Bank, the Central Bank of the Bahamas, and the Central Bank of Oman.

“The SUSI Flip feature has really captured the imagination of the banknote world because it was a genuine innovation in the way one particular printing machine was used to produce a feature that is viewable under UV light,” says Note Printing Australia’s Malcolm McDowell.

“With this global currency award, as well as the recent Australian printing gold medal award, the Solomon Islands’ $5 has become one of the Asia-Pacific region’s most acclaimed banknotes, and we couldn’t be more pleased for the Governor and the entire CBSI team for this achievement.”

While under UV, the combination of these lines creates what appears to be a third colour. In the case of the Solomon Islands, a combination of red and yellow was used to create a UV fluorescent orange that was designed as a fish pattern which aligned with the major design theme of the banknote: the creation of a sustainable fishing industry.

The cleverly designed feature was printed by NPA using a KBA NotaSys Simultan IV and was the world’s first application of this feature on a circulating banknote.

“The new 5 dollar polymer banknote is generally accepted by the wider public in Solomon Islands. We are currently ordering a new consignment which is an indication of the high volume usage of the 5 dollar banknote,” says Governor Forau.