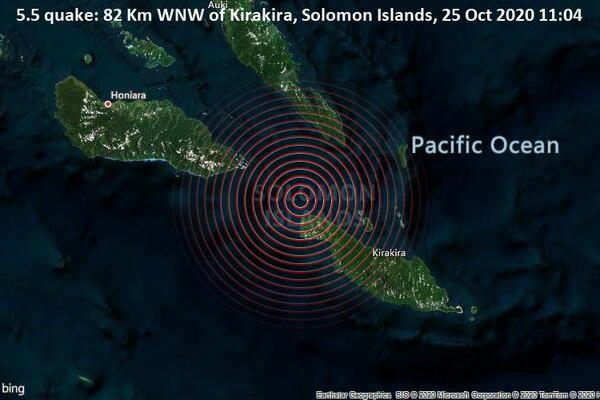 Reports from the relevant government agencies say there were no damages to properties or lives lost.
Source: volcanodiscovery.com
Share
Monday, 26 October 2020 07:39 AM

A shallow magnitude 5.5 earthquake was reported late last night near the town of Kirakira in Makira Ulawa Province.

According to the German Research Centre for Geosciences in Potsdam (GFZ), the quake hit late at night on Sunday 25 October at 10.04 pm local time at a shallow depth of 10 km.

Shallow earthquakes are felt more strongly than deeper ones as they are closer to the surface. The magnitude, exact epicenter location and depth of the quake are likely to be revised within the next few hours as seismologists review data and refine their calculations, or as other agencies issue their report.

A second report was later issued by the European-Mediterranean Seismological Centre (EMSC) agency, which listed it as a magnitude 5.1 earthquake.

Based on the preliminary seismic data, the quake should have been widely felt by almost everyone around the epicenter. However, reports from the relevant government agencies say there were no damages to properties or lives lost.

There was also no tsunami warning for areas affected.