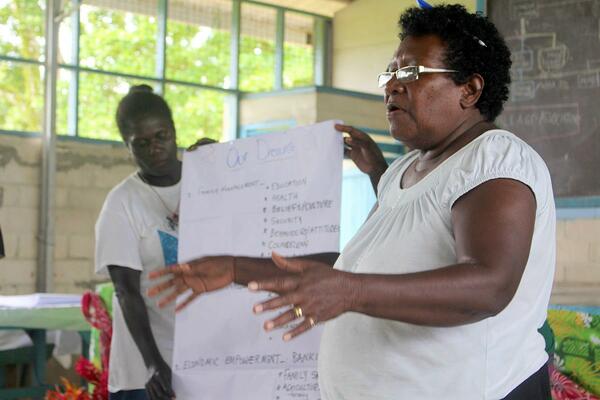 One of the participants at the recent workshop organized by the Western Province Council of Women.
Source: Supplied
Share
Monday, 03 August 2020 07:18 AM

The Western Province Council of Women (WPCW) successfully formed another ward council for the women of Shortland Islands, a milestone achievement that now directly connects women from both the inner and outer regions of the district.

This was made possible following a ground visit made by the WPCW executive this week to Nila Parish Community and held consultations for 49 women from across inner and outer Shortland Islands.

Both Shortland Islands Ward councils are formed by elected members from Ward One, Inner and Ward Two, Outer Shortlands.

A team comprising of the WPCW executive, a National Council of Women (NCW) representative and a legal consultant, held a three-day workshop in Nila Parish community with women from communities in both wards.

The purpose of the visit was to hold a consultation to review the WPCW constitution and strategic plan with women in the Shortlands. Capturing the perspective of rural women is a prime objective in the process.

President of the newly-established Ward One Council, Lovelyn Palupalu says the consultation educated her on the role of the government while the new information she learned will be shared in her community.

WPCW President, Rendy Solomon said the consultation was an opportunity to reach women, to be fully-inclusive and note areas they might overlook in the constitution and the strategic plan design.

The election process was initiated by the supporting legal services for WPCW, John Smith Pitabelama and facilitated by other members of the WPCW team.

The respective ward councils will be the vital connection between women at the grassroots level and the provincial body, Western Province Council of Women.

The Western Province Council of Women outreach to the Shortland Islands is supported by the Safe Families Project in partnership with Oxfam, Solomon Islands.

The Safe Families project, an Australian Government-funded initiative through Oxfam Solomon Islands, is aimed at creating better communities for women and girls by addressing issues of domestic violence and gender inequality.