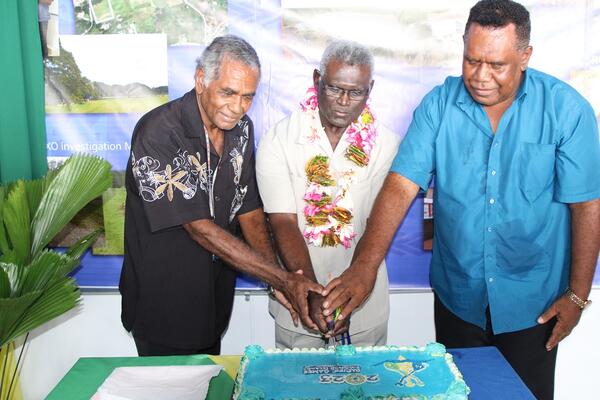 Speaking during the ceremony, Prime Minister Sogavare said the office will be the home of the National Hosting Authority and its partners - the Games Organising Committee, the Facilities Committee, the National Sports Council, and the Cabinet Subcommittee for the 2023 Pacific Games.

The Prime Minister said together they embody the theme – ‘Many Partners and one Team’, for Solomon Islands.

He said in exactly 1,089 days from its opening (Wednesday 22nd July 2020), the first activity of the 2023 Pacific Games will take place in our beautiful country.

“Together, they will not rest over the next 1,089 days to ensure all preparations are completed prior to the Games. Most importantly, they will ensure our country will deliver the best Pacific Games ever and, also ensure that we achieve the best-ever performance from our athletes to reach the highest-ever medals tally for our country,” he said.

The Prime Minister said the office is and will continue to be the nerve-centre for the successful delivery of the 2023 Pacific Games.

“I take this opportunity to thank the Chairman and the members of the NHA Board and his Secretariat team for the excellent work the NHA, together with its partners, Pacific Games Council, the National Olympic Committee of Solomon Islands and National Sports Council of Solomon Islands have undertaken to take us to where we currently are today, 1,089 days from the 2023 Pacific Games,” he said.

Prime Minister Sogavare said he is comforted by the thought that compared to previous Pacific Games; we are ahead in our preparations 3 years out from the Games at this point in time.

However, the Prime Minister said we must not be complacent.

“I do realize and accept that the biggest challenge is my government’s ability to live up to its financial commitment to fund the Games,” he said.

Therefore, the Prime Minister said as the Minister responsible for delivering the 2023 Pacific Games and as the Prime Minister that has fought hard to bring the Games to our country, he is committed to secure and allocate the funds agreed to by the government in a timely manner to ensure the NHA can deliver the Games.

The Prime Minister also thanked all the development partners that have joined the government on this journey including the governments of the People’s Republic of China, Australia, Papua New Guinea, Indonesia, New Zealand, Japan, and United Kingdom.

The new PG 2023 office is located at the old Sea King Restaurant premises.