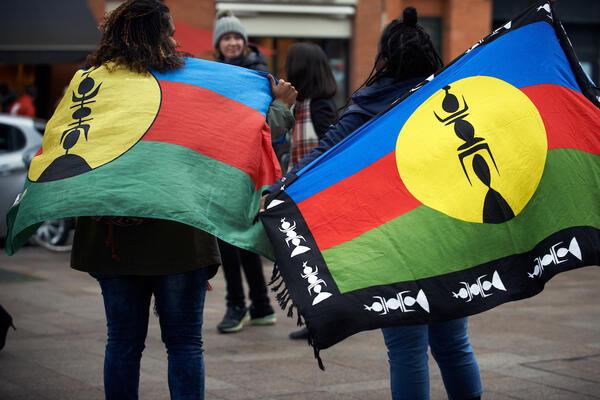 This final vote can be held any time before October 2022. The loyalist parties who support remaining a part of France favoured an earlier vote to consolidate their majority and allow for speedy recovery of the stagnating economy.
Source: Lowy Institute
Share
Tuesday, 07 December 2021 09:39 AM

France is persisting with its decision to hold the final of three independence referendums in New Caledonia on December 12, disregarding Indigenous independence leaders’ calls for a postponement of the vote and now for “non-participation” – effectively a boycott – due to the impact of the COVID pandemic on their communities.

France is persisting with its decision to hold the final of three independence referendums in New Caledonia on December 12, disregarding Indigenous independence leaders’ calls for a postponement of the vote and now for “non-participation” – effectively a boycott – due to the impact of the COVID pandemic on their communities.

The decision threatens France’s own 30-year peace process in the semi-autonomous territory, as well as stability in its preeminent Pacific possession. A boycott of the vote by the Indigenous Kanak population could potentially return the territory to the turmoil of the 1980s, with regional consequences.

Why is another independence referendum happening?

The Indigenous-based independence movement gathered strength in New Caledonia in the 1970s and early 1980s as France rolled back autonomy provisions it had agreed to and encouraged immigration from other parts of France to outnumber independence supporters.

By the 1980s, Kanak frustration led to violent protests in the territory and a boycott of an independence referendum in 1987. This was followed by deadly shootings between Kanaks and French militias months later during the French presidential elections.

The Matignon/Oudinot Accord in 1988, negotiated by the French government between pro- and anti-independence groups, ended the violence. This was followed by the Noumea Accord in 1998, which promised a three-vote process for independence.

A third vote was expected to be close, with both sides courting the 25,000 people who abstained in 2020 (of 180,000 total eligible voters). However, Kanak “non-participation” would render the vote politically void, as it did in 1987.

This final vote can be held any time before October 2022. The loyalist parties who support remaining a part of France favoured an earlier vote to consolidate their majority and allow for speedy recovery of the stagnating economy.

Independence parties preferred a later vote to maximise their chances to gain a majority.

To avoid overlap with French elections next year, the French government chose December 12 for the referendum over the opposition of independence parties.

In the first two campaigns, France scrupulously observed impartiality and invited international observers. For this final vote, it has been less neutral.

For starters, the discussions on preparing for the final vote did not include all major independence party leaders. The paper required by French law explaining the consequences of the referendum to voters favoured the no side this time, to the point where loyalists used it as a campaign brochure.

The French government also selectively commissioned and released opinion polls on the role of France in New Caledonia, while the local media has highlighted the potential negative effects of independence on health and other services.

Visiting Tahiti in July, President Emmanuel Macron spoke in strong terms of the threats to small isolated Pacific islands without France to protect them. France is also deploying more security personnel to New Caledonia for this year’s vote.

An ominous impasse with the Kanaks

The impact of the COVID pandemic has played a major role in this year’s referendum.

New Caledonia had experienced few cases and no deaths from the start of the pandemic until the Delta variant made its way to the territory in September. Since then, there have been nearly 300 deaths, most in the Kanak community.

The Customary Senate, the assembly of the Kanak area councils, declared a 12-month mourning period, while the pro-independence leaders threatened Kanak “non-participation” in the vote.

However, France’s overseas territory minister, Sebastien Lecornu, confirmed the December date. He said France’s non-compulsory voting system allowed anyone to choose not to participate if they wished.

The reaction among Kanaks was strong. Independence leaders reaffirmed their call for peaceful non-participation, eschewing the term “boycott” because of its association with the 1987 referendum boycott and the violence that followed. They noted, though, their 30,000 young Kanak supporters would not necessarily obey.

They also formed a new strategy committee to prepare a response to France’s decision to proceed with the vote. One leader described the decision as an “apparent declaration of war on Kanaks”.

On December 5, a group of largely Kanaks asked France’s highest court of appeal to urgently review the decision and postpone the vote until after the June French elections.

The pro-independence parties have said they would contest the result if the referendum goes ahead, and would not participate in discussions about the territory’s future that France has proposed for the day after the vote.

What the referendum means for the region

If there is instability or violence in New Caledonia, or a contested referendum outcome, it will impact the region.

France’s role in the Pacific will again be at issue, as it was in the 1980s. Then, regional governments focused international attention on France’s handling of its territories’ decolonisation demands and its nuclear testing in French Polynesia, ultimately leading France to change its ways.

France’s revised policies and serious diplomatic efforts have enabled it to forge new partnerships with Australia, New Zealand and Pacific island governments. Thus, France’s treatment of its overseas territories ultimately underpins its role in the region and its Indo-Pacific vision.

Regional leaders and analysts have urged the French government to have a rethink of its handling of this decisive vote.

And late last month, over 60 international academics with years of experience working on New Caledonia expressed concern over the referendum date in an open letter published by Le Monde.

For France, Australia and the rest of the region, New Caledonia’s referendum may not be the democratic beacon for the future it was designed to be, but instead, a portent of instability.

The article first appeared on The Conversation.